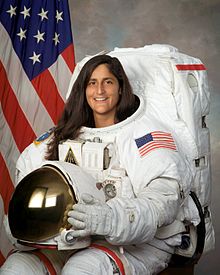 “Space is an amazing place to be in… it feels like home now,” Williams, 47, said during an interaction with students at the National Science Centre here.

“I would love to be on the next spacecraft for the next mission to space and give my expertise to the experiments being done,” added the astronaut, who holds the world record with 50 hours and 40 minutes for total cumulative spacewalk time by a female astronaut.

She has spent a total of 322 days in space on two missions.

Sharing her experiences with children from various schools here, she said she would also want to give a chance to the younger generation to take the lead and unravel the mysteries of space.

“Records are made for breaking, so I hope this is also broken,” Williams said in response to a question.

She will be in Mumbai April 3-4 before going to Gujarat, her father’s home state.