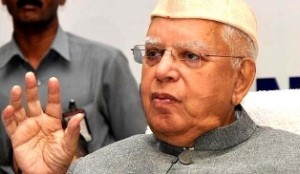 Dehra Dun : It has been a fairy-tale ending in the paternity suit against Narain Dutt Tewari with the veteran Congress leader admitting publicly that Rohit Shekhar is his biological son and that the matter should now be put at rest, but the candid admission before the media has sent a jolt in political circles in this small mountain state, with apprehensions that the son may stake claim to the legacy of his father, specially in the Kumaon division, where Tewari’s writ ran large.

Though Rohit Shekhar, after the admission by Tewari told the media that it was not all over and he would wait for the adjudication by the Delhi Court, where the next hearing is slated for April 21, but it appears that in the twilight of his age, Tewari may finally reconcile to the fact that he has a son and it is only but natural that he should pass on his legacy to Rohit Shekhar, who will obviously want to fill in his father’s shoes and make inroads into the political scene in Uttarakhand.

Even as legal experts here feel that not withstanding the fact that Rohit Shekhar wants the paternity case that he filed in the Delhi High Court in 2007 to reach its logical conclusion and have a judicial stamp on what Tewari has publicly admitted, the candid admission out of court will bring to an end the years of litigation arising from the paternity suit, and with it also the bad blood that has spewed between the two warring parties.

With Tewari slated to visit the Nainital Lok Sabha constituency, which he represented at one point of time next week, political circles here are abuzz with reports that he may start batting for his new found son in what is his home turf and pave the way for a new face to emerge in Uttarakhand politics.

With the type of clout he enjoys in the Congress Party and also the fact that the Samajwadi Party has been trying to woo the Brahmin leader, who is now in his eighties, few doubt that he could manage a ticket for Rohit in the ensuing Lok sabha elections.

In fact, Tewari made it clear at his meeting with the media that his son stood to get his legacy, both political and otherwise and should Rohit wish to contest the elections, he would only be more than happy to stand with him, adding that age was against him to contest any elections and he would at best only appeal to the people to pass on the baton to his son.

However, state BJP leaders feel that Tewari is now a spent force in state politics, which was evident from the fact that in the 2012 vidhan sabha elections he canvassed for his nephew in Nainital and former personal secretary in Dehra Dun district, but both the Congress candidates lost by heavy margins to their BJP rivals.

Further they said that the fact that the DNA sample test taken on the directions of the apex court from his FRI residence here, when he refused to give it on his own, plus the reasons for which he was told to unceremoniously quit the gubernatorial assignment in Andhra Pradesh after a TV channel clip allegedly showed him in comprising position with three males, would give the BJP leaders a whipping handle against the veteran leader.

Though they did not deny the fact that the clout that Tewari still enjoys within the Congress could go a long way in ensuring the party ticket for his son and also the fact that Rohit would get the sympathy of the electorate for not only daring the veteran leader into a paternity suit but also for  the years that he (Rohit) spent in ensuring justice for  himself, but they felt that the negative canvassing would outdoe these factors when it came to electioneering.