“With the rise in technology young generation is getting drifted away from traditional postal service”- Prem Verma, incharge philatelic bureau Shimla.

Shimla: Having one personal photograph on the postal stamp captured fancy of many people here in the city and many of them are availed the opportunity that the postal department provided at ‘Simpex- 2014’ a philatelic exhibition; held at Gaiety Theater, earlier in the week.

The exhibition was organized by the Postal department Shimla and while informing about it, Prem Verma, incharge philatelic bureau of Shimla, said “It is our annual event and the motif is creating awareness among the youngsters and make them divert their interest towards stamps collection as well as this is not only hobby where one does not waste money. With the rise in technology young generation is getting drifted away from traditional postal service. It is an attempt to make them come close to the postal service and know about various stamps and covers. It is very important to know your history.” 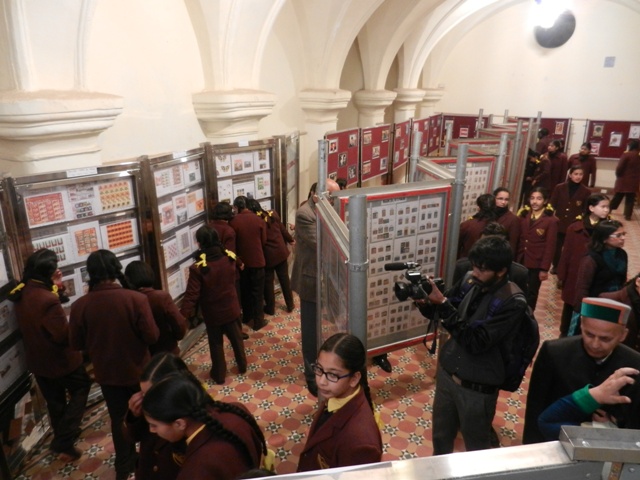 “For the first time in Himachal, Postal Department has introduced a scheme where people can get their photos printed with stamps for personal use that is for sending letter to friends. They need to pay just rupees 300 for twelve postal stamps”, he informed further.

More than ten thousand stamps were showcased ranging from pre independence to the Gandhi and his contribution, first stamp, Wild and sea animals; spices to famous personalities many more to name. The competition was divided into three categories junior, senior or youth and invitees (where participants were not part of competition) in which 20 people participate.

While commenting on the exhibition Kapil Dev Sood, one of the participants says, “Since 1953 I have been interested in collecting stamps and I have collection of rare covers and stamps. Right from the UN activities, pre-independence era to the current time, I have shared with the avid views stamps from all over the world. My collection depicts India’s rich heritage in the world of philately starting from British India, ex-princely states to the post-independence stamps. I feel that such exhibitions should be encouraged knowledge of our coming generations.”

The exhibition served as a bridge that connected the past and present; native and foreign; and bringing people close to the history of the entire nation. The collection has animals, History making stamps, Indian stamps, Foreign stamps, Special covers issued and many other to name capturing the whims and fancies of the people.

“I am very happy that our school took the initiative of bringing us to this exhibition. It was enlightening experience and so we all got an opportunity to come face to face with a postal world which in our time is taking back seat as electronic mail has replaced the old traditional way. I loved the famous personality collection”, Jigyasa Grover, seventh class, Auckland House School student.