Devesh Kumar, Deputy Commissioner, Mandi and Chairperson of Shivratri Fest Committee, received the presiding deity when it arrived at Madho Rai temple. According to the tradition, deity along with Kardars will be housed at the hilltop Tarna Temple.  The deity, it so happens, does not participate in the procession which is taken out on three occasions during the festival. 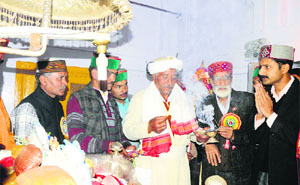 The festival will formally be inaugurated by the Chief Minister, Virbhadra Singh on Saturday. Urmila Singh, Governor of the state will be chief guest for the closing ceremony. In all, 215 deities have been invited for Shivratri festivities in what is termed as  ‘Chhoti Kashi’, a reference to Mandi township as the little Varanasi.

The festival also includes cultural night functions which would be held at Paddal, in defiance of the protest by local artists and activists, who wanted to hold it at the old venue.