Shimla: Agitated by a provocative comment of Chief Minister Virbhadra Singh, which the opposition termed as derogatory, BJP legislators disrupted the state assembly for the second consecutive day and walked out of after question hour, without participating in the days listed out business. 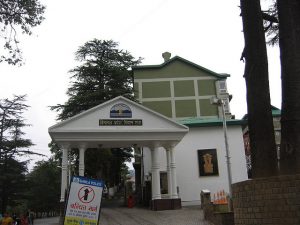 As the house commenced for taking up the days question hour and other listed business, the opposition was on its feet drawing the Speakers attention to the Chief Minister’s alleged comments made outside the house yesterday.

Raising the issue, senior BJP member Suresh Bhardwaj said that the chief minister by commenting that the opposition was like bonded labour of Prem Kumar Dhumal was not just against the dignity of the leader of the opposition but was also derogatory against every member of the house.

Speaker Brij Bihari Butail did ask the opposition members to stop making a display of such dresses as it was against the rules of the house but failed to prevent them from doing so.

Amidst the prevailing pandemonium of slogan shouting, the speaker ordered for taking up the listed questions. The questions raised by opposition members went unanswered as they did not participate in the proceedings.

Soon after the question hour, all BJP members staged a walkout.

The chief minister clarified that he had not hurt any opposition member as he never labelled them as bonded labour. He asked the Speaker to expunge all derogatory remarks and slogans made by the opposition.

About alleged corruption charges levelled by the opposition, the chief minister said that he had himself demanded a CBI probe into them.

“I had filed defamation suit against opposition leader Prem Kumar Dhumal and his two sons Anurag Thakur and Arun Dhumal as well as Arun Jaitely, the Leader of Opposition in the Rajaya Sabha,” said Virbhadra Singh.

The Speaker asked the media to desist from reporting on the slogans raised in the house. He even pointed out that the alleged corruption matter was sub judice as it was before the courts.

Asking the opposition to abide by the rules of the house, the speaker warned that he would be forced to take action again those members who disrupt the house proceedings.

Parliamentary affairs minister Mukesh Agnihotri said that opposition had wasted valuable time of house as it even boycotted the Governors address yesterday.

He said that the opposition was deliberately adopting obstructionist tactics, knowing fully well that the house had been convened to pass the budget as well as important legislation was listed to be taken up during the session.