One certainly does not want to miss this thought-provoking book about why a potentially strong country like India continues to bear the tag of anemerging economy. What stops it from acquiring the label of a developed country? If the country has abundance of natural resources, plethora of trained work force and blessings of a great weather, there should be no excuse for inertia.

Nevertheless, if things continue to be in a wanting status, should we blame the outdated constitution, the ill-defined federal structure, an unsuitable governing system, the degenerated mindsets of people, the continually increasing population or deep rooted polarisation? Whatever may be the cause, solutions have to be found. In addition, if pleasing numbers are quoted about economic growth, number of people below poverty line, energy generation, or improvement in infrastructure then we must remember that numbers stated in absolute terms do not depict the reality on ground. Unless realistic comparisons are made such as computing the numbers in percentages, or comparing the statistics with similar parameters of neighbouring countries like China, Malaysia, and Singapore etc, inferences are unreal.

No matter how significant or insignificant the role of leaders in the past may have been, our present leaders should not be allowed to continue the bamboozlement by their tall and sometime fake claims. Excuses such as population, corruption and diversity are as pointless as the pleas that the opposition parties did all the damage. Sticking to outdated traditions, spaghetti of laws, ill-conceived education system, and the reminiscent mindset of slavery will drag us down from whatever prosperity levels we have painstakingly attained.

In this maze of numbers and crossroads of political statements, the relevant issues are eclipsed into oblivion. Blessed by a large and young workforce (75 % out of 1.25 billion being at age less than 35 years) that is living amidst enviable plethora of natural resources, if India has not done as well as it should have, it is no cause for worry. Only political will is required to turn the situation around. Discretion at various levels, which causes corruption, needs to be curbed down to the barest minimum. This is only possible if systems are well configured and they are adequately lubricated for smooth operations. 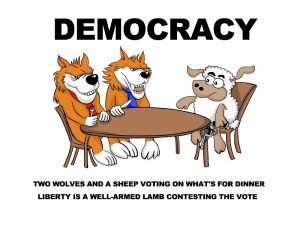 After all what should be the aim of governance and leadership? Prosperity or happiness is only credit-worthy if it is inclusive and covers the entire population of the country, albeit not necessarily equally. If a new political party decides to follow the paradigms proposed here, it will have to operate on the mindsets of people first.

The purist may debate for hours about the merits and demerits of various paradigms such as democracy, communism, socialism, capitalism or any other ideology for governance. Yet this discussion is losing relevance day by day. Systems in various countries have adopted a fusion of these ideologies, sometimes with retention of their core doctrines. While democracy is inherently suited as a methodology for selecting people’s representatives it fails to uphold the three tenets freedom, equality and the rule of law. It also has practically no role to play after the elections are completed.

In addition, the erosion of morals and ethics brings in power seekers who have a criminal orientation of mind. In the countries where democracy is deemed prevailing, instances of anarchy, autocracy, totalitarianism, dictatorship, or centralisation of power are frequently noticed. It is no longer correct to say that democracy is for the people. Citizens are naive when they think of democracy as, power in their hands.

One may then ask a few serious questions:

Political leaders will certainly discard these questions as impracticable or unanswerable because these threaten their power and control. They diminish the possibilities of dynasty rules. Yet citizens should not stop asking these questions. They should ponder over the possibility of establishing a political leadership system that is based on a pyramid structure just as we have in all management echelons. Merit governs promotions.

A political leader must progress from the leadership of a few thousand people to lacs or millions, culminating in a position where he governs a full-fledged state; in other words, from village or city to district and then to the state. A leader should possess in his repertoire the experience of handing public level issues varying from civic amenities to security. Inheritance of power should be minimised and confined to those who exhibit competence. If a leader manages to barge in at the top levels, he is most likely to end up in the disaster of a failure. To establish such a merit oriented system, we have to proceed gradually, spanning at least a decade. During this intervening period, implementation of self-governance (Swaraj), remodelled socialism, or both will have to be pursued.

The ground reality in India is that at least three different ideologies (socialism, free economy, and crony-capitalism) were experimented with, for over six decades and a certain environment for governance has been established in the country. We must therefore not bang our heads against the wall trying to replace the system. It is true that this environment is not as stable as it is made out to be. Our option of conducting elections, and trying to incorporate some reforms in them, is also a futile attempt. India, basks in paralysis for five years in the hope of improvement, but it faces new challenges after every general election. The anti-incumbency sentiment only changes guard. It does not foster the framework that can ensure prosperity. State elections create similar mess in the states. Elections in India, as probably in many other countries, are simply events of turmoil. They fail to guarantee the three tenets of democracy ie freedom, equality and rule of law.

We cannot adopt a system that may have been successful in the advanced countries because our mindsets are different and so is the nature of our centre-state relationships. The authority and responsibilities here are overlapping and conflicting. In general, the states are weak. Should we make our states more powerful and independent than what they are at present, is a question that has been debated many times over. The prevailing political viewpoint is that whatever was perceived and formalised by Dr BR Ambedkar [1]and the others is the best; no innovation is necessary.

Not far from here is China, a country where, in 6 decades, poverty has given way to an expanding middle class. Leaders there do not inherit power or position. They come with experience and they possess merit and competence.  China does not conduct elections, nor does it suffer the cycle ofelect and regret. It depends on a merit based selection process. China does not wait for anti-incumbency sentiment to bring about a change. It has instilled a self-correcting mechanism in the pyramid of it political structure.

India needs to change in many ways. The enactment of law may continue to lie in the hands of the positioned people representatives. Change over from elections to selection should be brought in gradually, spanning probably a decade over. The executive branch however can be tuned to become well-oiled machinery. In the present state of crony-capitalism operating under the mask of democracy, we might look at the paradigm ofRemodelled Socialism[2]. This is a great technique to operate in this risky and demanding environment. It allows crony-capitalism to co-exist with socialism.

Remodelled Socialism is different from socialism, as it is different from self-governance of the Swaraj type. Here, the experts from the society, with proven honesty and performance, are roped in to assist in governance, but they do not interfere in the process of law enactment.  In a reversed avatar of Remodelled Socialism, competent but experienced executives of I*S or MBA types, could be selected for political positions.

Indian governance in the last few decades is earmarked by priority inconsistency, policy paralysis, and execution passivity. The prime resource of the country, the work force, has been cold-shouldered. The gift of gods, the land, has been outrageously neglected and left to the whims of profit seekers. The chaotic landscape that has come about by this delusion, both in rural and urban geography, is irreversible. Similar devastation has occurred in our other natural resources like water, energy, metals, radio spectrum and the people. Now, we have no option but to apply our minds seriously to remain sustainable. This is our obligation to our forthcoming generations.

While poverty alleviation may be the prime need of an individual, congeniality of the surrounding environment also is his concern. The present status of our landscape, which is dilapidated beyond doubt, may actually be a blessing in disguise. We do not need the pretext of earthquakes, floods and other calamities to bring down the degenerated infrastructure for replacement. Likewise, streamlining of other resources is also not a rocket science. It is but simply a matter of political will and innovation.

Though the domain of our concern is unlimited, a few items need our attention more than the others do. Building the necessary infrastructure, developing the human resource, harmonising the rural and urban development within the constraints of sustainability and improving our economic situation are some glaring needs. Population should be treated like an opportunity to be exploited and it should be harnessed to carry out productive activities. Natural resources must be preserved and used with prudence. Innovation is required in tackling the issue of education; its relevance is of prime significance. Polarisation is the devil that we must encounter with wisdom and grit.

Unconventional thinking and a non-conformist approach enabled Arvind Kejriwal [3] to dislodge the decades old strongholds of BJP and Congress parties in Delhi state elections in 2013. Within 48 days, he was forced to resign by the combined might of BJP and congress, who were alarmed by the speed at which he was going. They could not digest his leftist orientation as he was going full blast against crony capitalism. For the AAP – Aam Aadmi Party to succeed, its leftist tendencies will have to make place for the more centralized doctrines.

Success cannot be achieved by the streaks of good governance, as the AAP probably thought. Even if we grant them the prototype of uninhibited governance that they were presenting, as a prelude to the larger general elections, governance must flow from well-defined framework of priorities, policies, rules and processes. Good governance is possible only with collaborative action of individuals and departments. Two pre-requisites though are minimisation of discretion and maximisation of computerisation.

The Indian endeavour needs innovation and commitment no doubt, but our vision and missions should be reasonable and realizable so that the doers are convinced about the targets that they need to accomplish.

[3] Arvind Kejriwal (born 1967), the founder of Aam Aadmi Party (AAP) dislodged powerful political parties like INC and BJP to grab the seat of Chief Minister, in Delhi in 2013.