Dehradun : Even as Doonites welcomed the New Year to the ringing of bells and strains of ‘auld lang syne’, the rich wildlife that throngs the forests in and around the Doon Valley, which could create a tourism circuit in its own right, was at the receiving end.

The Uttarakhand Forest Department was keen to cater to the needs of the babudom and their cronies even as they closed their eyes to the animals in the forests.

While poachers are known to have had a field day on New Year’s Day as the forest and wildlife staff employed to contain poaching, were busy catering to the needs of the large number of people that revel in the various guest houses located at the heart of lush forests in Uttarakhand, the crackling of bonfires and vehicles criss-crossing in the forest roads with search lights to have a glimpse of the wild life keep the animals at their nerves end. 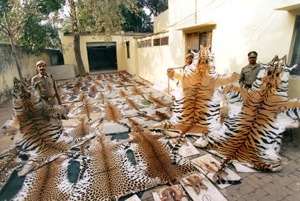 According to sources in the state forest department, all the 55 forest rest houses in Uttarakhand were booked for the New Year’s eve.

The occupants were mostly rich and powerful, with most of them being close to the political and bureaucratic bigwigs in the state.

In fact, it was only at the behest of the power lobby that one could get a reservation for the guest houses in the forests, so great was the demand.

In fact, it was not only the forest rest houses that were full, but the large number of resorts that have come up in the peripheries of the national parks, wildlife sanctuaries and forest areas, most of them owned by influential people, including a minister in the Vijay Bahuguna government, were also packed to capacity to herald in the New Year.

There are reports that some stayed at the hotels in nearby areas, enjoyed themselves in the forests, courtesy some of the state and moved out in the wee hours.

Unfortunately while there is a hue and cry to save the flora and fauna with environmentalists and wildlife lovers doing their utmost for the cause, but as far as the Uttarakhand government and the state bureaucracy is concerned, the wildlife and forests are very low on the priority list.

At least this is the message that one gets taking into consideration the rampant encroachment and felling of forests and death of wild animals in the state.

Going by reports, 2013 was a rather mean year for the wildlife in the state. At the very beginning of the year three elephants were run over by a train in the Rajaji Park, despite the fact that the issue of wildlife being disturbed and the risk of animals being run over has been taken up time and again by the wildlife lovers with both the state forest department and the Railways.

The railway tracks run through a major portion of the Rajaji Park and wildlife lovers have appealed that the train speeds be kept down while the trains cross the Park area so that there is less disturbance to the wildlife, but apparently there are no takers for this as far as the people manning the trains are concerned. Interestingly the Rajaji Park has a large strength of pachyderms, who have been confined to the forest pocket because of encroachments in the forest pockets that served as migration corridors.

Besides the three pachyderms that were run over by the train, a female 20-year-old was electrocuted to death and two baby elephants also met an untimely death, taking the number of wild elephants killed in the state to over 20.

Then there have been the reported killing of about 12 tigers by poachers and about 80 panthers having been killed in various parts of the state. While some of the panthers were killed due to the man-animal conflict others fell to smugglers of skins and feline organ parts.

And this does not include the number of herbivores that are killed for the pot by the villagers living in the immediate periphery of forests and also poachers who are also known to sell the venison and flesh of the wild animals.

To curb the menace of poaching the head of the anti-poaching cell, S K Dutta claims that he has no wherewithal to tackle the problem.

“No staff has been posted under me and it is not possible for me to do all work inside the office and also in the filed single handedly. To add to the problem there is no provision for funds to have an information network that can give clues on the movement of poachers and others in the forest areas. Even a vehicle has not been provided for movement and under such trying circumstances it is not possible to have an effective system in place to contain the problem of poaching”, says Dutta.

The forest and wildlife department are under the chief minister, who has a number of other important portfolios and as such can hardly find time to cater to the needs of the departments.

However, the state wildlife department claims that it understands the importance of having surveillance during the New Years and certain measures have been adopted to ensure that the poachers do not have a field day.

They claimed that despite the shortage of staff surveillance is being kept at the farm houses and resorts and hotels at the peripheries of the Parks, wildlife sanctuaries and forest resorts to ensure that there is no wanton killing of wild animals.

They said that all leaves of the forest and wildlife guards had been cancelled and they have been put on high alert and told to intensify patrolling in the forests specially during the nights during this period.

The staff at the forest rest houses have also been told to ensure that there is no movement of the guests from the guest houses after dark and the bon fires in the open lawns are a low key affair and loud music is not played as both can disturb the wildlife.

“We have made it clear to the staff that they will be held accountable for any poaching that takes place during the festive season, specially Christmas and New Year and if any poaching or killings of animal does take place it will go against them for future promotion. If there is utter negligence because of which the poaching takes place, departmental action will also be taken against them”, they claimed.

Department sources said that while the rest houses had been given to the guests for the festive season but they had been specifically told that they will not be allowed to use search lights or torches with a high beam and loud music would not be allowed under any circumstances.

Vehicles will be banned in the forests and even the guests will not be allowed to move in the forest area after sunset. Photostat copies of passports of foreign guests have been kept eo ensure that there is no violation of rules by them, they maintained.

Meanwhile wildlife lovers alleged that the number of rules had been made on paper and like every year there will be violation this year also.

“The lowly paid forest guard or wild life guard has no say against the high and mighty staying at the rest houses. It happens every year, despite all the safeguards put in place because the revelers are out to have their fun. The forest guest houses should only be given to people after verification and ensuring that they will take care of the forests and the wildlife”, they pointed out.