Dehradun: Though Uttarakhand chief minister is under tremendous pressure with reports that he may be replaced shortly and the Congress high command has just given him a reprieve of a few days till they finalise his successor, but Vijay Bahuguna is all focused to ensure that his son Saket makes it to Lok Sabha this time and is wooing the Tehri parliamentary constituency with sops. 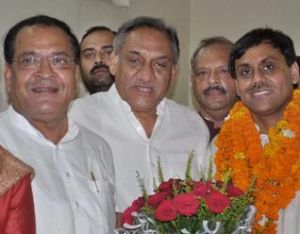 Once bitten twice shy, seems to be on the mind of the chief minister as his son Saket, though getting the ticket for the by-election to the Tehri seat after the vidhan sabha elections (the seat was earlier represented by Vijay Bahuguna himself and he vacated it after being made the chief minister causing the by-election) lost to BJP’s candidate a member of the erstwhile Tehri royal family.

Despite being the sitting chief minister and MP from the Tehri parliamentary constituency, Vijay Bahuguna could not get his son to visit who lost by a discerning margin. Infact, there are reports that quite a section of the Congress party had not worked in zeal for Saket, as they did not appreciate the dynastic rule being propagated in this small hill state.

Political pundits here claim Congress leaders and workers alike, were taken back when Saket was given the party ticket for the by-election, as it went against the basic tenets of what the party vice president Rahul Gandhi was saying against giving tickets to sons, daughters and other relatives of big party leaders.

But the corporate lobby, which incidentally is said to have played a major role in anointing Vijay Bahuguna as chief minister of Uttarakhand, coupled with his sister Rita Bahuguna, who was the chief of the Uttar Pradesh Congress Committee then, played a major role in tilting the favour of Saket. But despite all efforts by the chief minister and his cohorts, Saket failed to live up to expectations.

But keen to ensure that his son wins this time after the initial launch pad failed, the chief minister is doling out sops in the Their parliamentary constituency in the hope that it will woo the voters of this sprawling, but largely rural constituency. Besides, the Congress is keen that it retains the four other Lok Sabha seats and wrests Tehri from the BJP in the 2014 Lok Sabha elections.

Some of the sops that have already been doled out are declaring the Rawai population of Uttarkashi district and Jaunpur area of Tehri district as OBC, foundation stones of cold storage, engineering college, polytechnics and ITIs laid at various places besides the setting up of a spice park. Setting up of a the Tehri Lake Development Authority, foundation stone of an international stadium at Raipur, construction of flyovers and Rs 135 crore flood protection project in Uttarkashi.

But popular opinion is that reports of the likely replacement of Vijay Bahuguna as chief minister could take away the icing from the dream project that he has in mind. This is because of the fact that it will not only give a whipping handle to the opposition BJP, but will also flare rumours that he had to be replaced because of poor governance and rampant corruption.

These two issues will become the Achilles heel of not only the chief minister, but his son Saket also, who like his father is reportedly surrounded by sycophants and is alleged to interfere in the day-to-day administration of the state. This has not been taken lightly by a section of the Congress leaders and workers in the state.