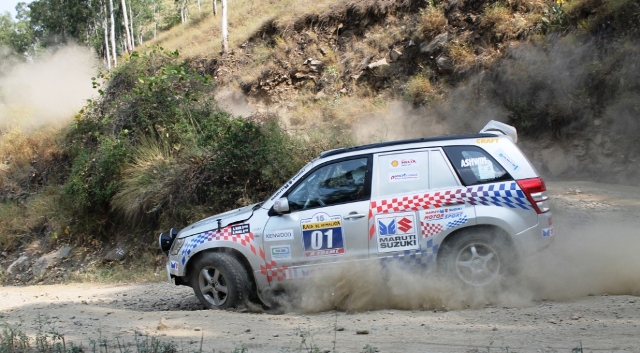 Leh: The 15th Maruti Suzuki Raid de Himalaya, the most exciting motorsport event in India, culminated in Leh after travelling over 1800 kms over 6 days which included the highest motorable passes and inhospitable sub zero temperatures.

Rana has won this coveted trophy for a ninth time, and second time with Ashwin Naik as co-driver. He had an overall timing of 9.46.23 Hrs over 6 days. Sanjay Agarwal/Shiv Prakash driving a Maruti Suzuki Gypsy finished as first runner up with cumulative timing of 10.10.35 Hrs while Harpreet Bawa/Parminder Thakur were second runner up having clocked 10.11.23 Hrs.

Jagmeet Gill/Chandan Sen of Team Maruti driving a Maruti Suzuki Gypsy lifted the trophy in the Adventure Trial 4W category with an overall penalty of 0.03.46 Hrs. Subir Roy/Md. Mustafa was first runner up with a penalty of 0.03.53 Hrs. while Kaushal Patel/Gaurav Patel were ranked overall third with cumulative penalty of 0.04.01 Hrs.

Helmut Frauwallner from Austria was crowned champion in the X-Treme 2W category with a cumulative timing of 9.09.54 Hrs. This also makes him the overall X-Treme category of 15th Maruti Suzuki Raid-de-Himalaya. Stephan Rausch from Germany clocked 10.08.05 Hrs and finished as first runner up and Bangalore based R Nataraj was second runner up with an cumulative timing of 11.05.10 Hrs.

The winners were felicitated by Mr. Manohar Bhat, Vice President (Marketing), Maruti Suzuki in the presence of Mr. Manjeev Bhalla and Mr. Vijay Parmar from Himalayan Motorsport Association, the organizers of the rally.

In the 15th Edition of Maruti Suzuki Raid-de-Himalaya, out of the 75 cars, bikes and scooters that had entered the X-Treme category, 29 finished the rally , inclusive of all 5 participants in the newly created Scooters category. In the Adventure Trial category, out of the 62 cars that had been flagged off, a remarkable 41 made it through the final leg of the rally.

Congratulating the winners of the 15th Maruti Suzuki Raid de Himalaya, Mr. Manohar Bhat, Vice President (Marketing), Maruti Suzuki India Limited said, “The participation this year is the highest ever and it has been
increasing with every edition.”

As the leading automobile company which brought this internationally acclaimed platform for motorsport, this is very encouraging. Another notable thing is that profile of participants is also changing every year. Today Maruti Suzuki Raid-de-Himalaya is favourite amongst not just the young and old but young at heart, professionals or simply anyone who loves motorsport. This year there Maruti Suzuki Raid-de-Himalaya saw a huge contingent of women participants. Many of the notable first were an all women team Himachal Police comprising Constable Munish Mehta and Constable Richa Sharma, another all-women pair from Indian Army constituted by Maj Smitha of ASC and Capt Madhavi Singh of EME.

Ms Sheetal Bidaye of Mumbai became the first ever Indian woman to compete in Raid X-Treme while 20 yr old Kalyani Potekar of Pune was the youngest woman biker who braved the Himalayas in the Raid X-Treme (Alpine) category.