Where the nation wants to see firmness on the border issue with Pakistan, Prime Ministerial aspirant of Indian National Congress – Rahul Gandhi is looking to propel the party’s campaign by letting lose ‘emotional’ tales on the voter.

In the run up for Lok Sabha 2014 poll, Rahul recently addressed a rally at Churu, Rajasthan, a Congress ruled state, and spoke about the assassination of his grandmother, Indira Gandhi and father Rajiv Gandhi. 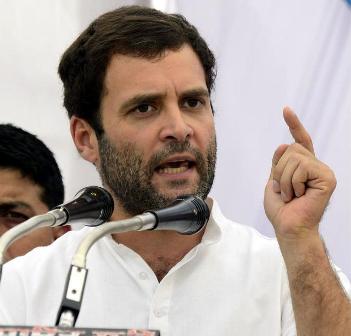 Not only this, he even postured as a brave man when he said, “I too could be killed some day but I don’t have any fear.”

Though the assassination of Indira Gandhi and Rajiv Gandhi was unfortunate but the timing when Rahul chose to toss the issue is crucial, not just because of it being  poll time but the country is facing tough days where prices of essential commodities have skyrocketed and several domestic issues like rampant corruption are fueling anger and frustration.

On the borders at the Line of Control (LOC) in Jammu and Kashmir, Pakistan has violated cease fire several times. In 2013 alone, 136 ceasefire violations have been recorded, the highest in 8 years.

Country is looking for a strong leadership, especially after incumbent Prime Minister Manmohan Singh despite a weak assurance of ‘Firm Action’ one recently expressed willingness to work under Rahul Gandhi as Prime Minister.

Many, simply mocked the statement but there are several people pinning hopes on Rahul, being the grandson of Indira Gandhi, to lead the nation out of a leadership crisis the country has fallen into.

Sure enough questions arise why Rahul Gandhi only reminiscences about the assassination of his grandmother and father and not the hundred of others who died in the long struggle for the nation to achieve freedom.

He conveniently forgot to address families of martyrs and he ignores the voices of people suffering from skyrocketing prices. It is unfortunate that he fails to wave his hand for those unemployed youth, who wait for new leadership with a vision to put food on the table.

Political parties are thick into game of blaming their opponents instead of raising real issues confronting the people and showing a way-out.