Shimla: Upset with being a chief parliamentary secretary in the Himachal government but with not enough independence to work, Rajesh Dharmani put in his papers yesterday by dispatching his resignation letter to chief minister Virbhadra Singh. 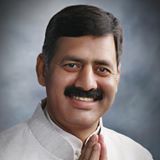 In the nine month old government, Dharmani the MLA from Ghumarwin is the second CPS to have resigned. Earlier Rakesh Kalia, the MLA from Una district, had resigned.

Party sources claimed that Dharmani, who was attached to the forest ministry, was dissatisfied with the way the ministry was functioning as there was hardly any input from him that was ever incorporated into the government functioning.

Though, he had brought it to the notice of senior ministers, said the source, but not remedy was offered, forcing the young Turk legislator to resign.

By qualification, Dharmani is a civil engineer.