The kind of free fall the Indian rupee has witnessed in the past couple of months, almost everyone from your grandmother to the neighborhood grocery store owner has been questioning, where will this slump hold, if at all.

The worries don’t stop here; bleeding equities and debt markets have cried out loud. This blood bath has turned Dalal Street into a haunted graveyard and the drop doesn’t seem to be ending any time soon.

All liquidity tightening and capital control measures by the government and Reserve Bank of India (RBI) have gone out of the window – not before doing more harm than good. While the rupee incessantly falls, we hold our heads helplessly, witnessing the collapse of an emerging economy. 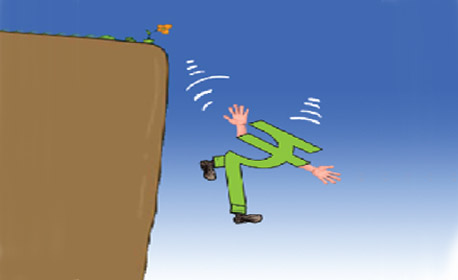 With the rupee failing be tamed manually, it should be allowed to find a fair value on its own.

The ballooning Current Account Deficit (CAD) and fiscal deficit have us believe (and rightly so) that the rupee fall is not only about deteriorating fundamentals. In fact, it’s also about inbound investments drying up and unless the trend is does not reverse, the falling rupee’s would not stop anytime soon.

A slight recovery was observed in the currency when the RBI sold some dollars to the Oil marketing Companies (OMCs) for meeting their dollar demands to pay for imports at the month’s end and injected a few more through the Open Market Operations (OMOs). This proves that our economy is in need of dollars at the earliest possible.

The dollar infusion (and fuel price hike) has helped the USD/INR rate to find some kind of support at 66-67 levels, correcting itself from 68-69 range last week. Unless, the Syria war begins, the rupee is expected to maintain this range for a week atleast.

Let the Rupee Find a Fair Value for Itself

Generally, experts make use of Real Effective Exchange Rate (REER) during the times when market is low in volatility to get a real idea about the fair value of rupee. REER is the weighted average of a currency of one nation in comparison with others (trading partners mostly), adjusted for inflation.

A currency for which the REER index is closed to 100 is termed to be valued fairly and anything above or below it is considered to be overvalued and undervalued respectively. The rupee has been undervalued since 2004 to 2006 when the currencies from six major trading partners are taken into basket.

The REER (six currencies) fell to an all time low at 93.90 in March 2009 and for the present year it stands at 96.94. This means we are still overvalued and more fall is anticipated to achieve the all time low of 93.90.

Therefore, the rupee will plunge more against the greenback (maybe around 70, which adds up to 30% fall since the starting of the year) irrespective of what our government or the RBI comes up with. To stem its fall, dollars need to be brought into the economy before long.

Exports and the Rupee Fall

Renowned economist Surjit Bhalla had once opined that even nations with current account surpluses faced currency depreciation by roughly 25% to 30% on an average at some point of time in their history. It helped them in boosting up exports furthermore.

Usually, the rupee depreciation brings with itself competitiveness that increases scope of export for any country.

This results in an amplification of exports and decrease in imports, bringing CAD back to a sustainable level. Therefore, currency depreciation is a preferential option even in good times and China is a perfect example for this.

However, India doesn’t seem to be benefitted by this age old principle of economics presently. Why?

The reason is that our top 5 exports – petroleum exports, gems, jewelery, gems and textiles contain extensive imported inputs. And hence, any constructive effect in exchange rate doesn’t bring in any appreciative effect on the export side.

Also, in wake of the rupee fall even importers are pressurizing us to re-negotiate deals at lower prices. And lastly, unlike China, our infrastructure for export is much lacking to bring about any major gains in such a situation.

For the last few months, not only the rupee but many other currencies have taken a fatal fall. And, speculation of currency is the major culprit for the steep fall.

Since July, speculation in currency forward markets has been curbed considerably by the RBI and even banks have been prevented from taking proprietary positions in currency exchanges for themselves. They can only do such for their clients now.

This reduced the tradeable currency volumes by more than half in the domestic currency forward market but unfortunately the global non-deliverable forward (NDF) markets are out of the RBI’s regulation. The average daily volumes are in the order of around $50 billion in NDF market in comparison to a partly $5 billion in the local derivates market.

Both the markets are interconnected. The RBI economists claim that the NDF market influences the rupee-dollar exchange rate volatility in onshore markets.

Therefore, even if our government comes up with strict capita and speculation controls (as it has lately), the movement of non- deliverable partially convertible rupee can’ be regulated at all.

As per the official records, trading of rupee in the NDF market is estimated to be around $60 to $70 billion per day in markets operating from Singapore, Hong Kong, New York and London currently.

Therefore, the speculation driven price trends offshore get reflected in onshore markets and these are difficult to regulate. Unless, there is move towards making our rupee completely convertible (China is already working on the concept) India will keep getting troubled by the violent moves in the NDF markets.

We are already completely integrated with the rest of the word in trade and monetary flows and therefore, fully convertible rupee is an idea in the right direction.

Till the time, keep fingers crossed, and pray that America doesn’t go all out on Syria and resulting in sudden increase of oil and other commodity prices, further denting any hope of the rupee’s revival.