Shimla: Holding employment, housing and food as the basic needs of man, chief minister Virbhadra Singh on Friday by launching the food security scheme became the 5th state in the country to unfold the UPA governments’ flagship program.

Centurion Mast Ram (104) and Vidya Devi (70) of Sunni area were the first persons to be secure ration bags that were given personally by the chief minister at a public function held at city center The Ridge. 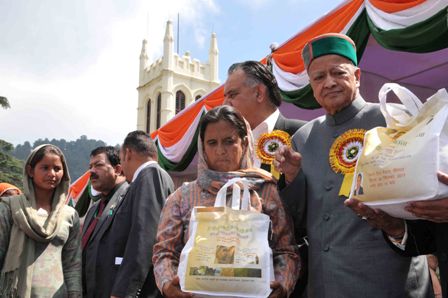 Speaking on the occasion Virbhadra said food security was the union governments’ historic scheme to ensure that nobody remained hungry in the country anymore.

The UPA government had done revolutionary work by fulfilling the common mans needs for food, employment and housing, he said after referring to the 100 days of employment being provided under MNREGA.

The scheme targets about 37 lakh people in the state who would get wheat at Rs 2 per Kg and rice atRs 3 per Kg per month whereas Anntodaya families would continue to get 20 Kgs of wheat and 15 Kgs of rice per month.

Families covered under ‘Anntodya Ann Yojna’ by the panchayat sabha meetings held on 7 April, 2013 would be brought under the ambit of ‘Rajiv Gandhi Ann Yojna’. Below poverty line (BPL) families, social security pensioners and Ann Purna Ann Yojna beneficiaries too are to be covered under the new scheme.

About misuse of the schemes for poor, the chief minister warned that observers would supervise meetings of panchayat gram sabhas to ensure that well-off persons do not get listed as BPL families and only the eligible poor were included in it.

Mentioning the state government run food subsidy scheme, he said that a budgetary provision of Rs 175 Cr had been made to run this program that was started by his government in 2007. Under the scheme, every ration card hold is three pulses, two edible oils and iodized salt.

All sections of consumers were being provided Moong Dal at Rs 49.99, Kabli Channa at Rs 35.99 and Udad Dal at the rate of Rs. 34.99 per kilogram, edible oil at Rs. 49.99 and salt at Rs 4 per kilogram to all families in the State. The state is bearing all financial expenses for this scheme from its own resources, said Virbhadra.

Food and civil supplies minister GS Bali said that over 70 percent beneficiaries of the food security scheme stood identified while rest would be covered soon.

Besides others, cabinet ministers and senior officials were also present for the function.