Shimla: Every ambitious child grows up with a dream to someday be a doctor, engineer, lawyer or teacher. Ashok Kumar Thakur (30), a native of Bilaspur, aspired to be an international hockey player that remain unfulfilled despite having all the talent.

Though I have part of teams that has won gold or silver medals even while representing Himachal Pradesh at the national levels but to make it to the international level needed more investment both in terms of effort and funding as the state did not have good enough facilities for promoting the sport, says Thakur, who now runs the dhaba “Mezbaan” at Boileauganj, a Shimla suburb.

He recalls, “Like many others I was passionate about hockey from my childhood and learn’t to play the game after seeing others. In 2001 I got an opportunity to represent Himachal at the national level and our team won a gold medal.”

He tells, with the guidance of these two coaches, I got an opportunity in 2001 to represent as a hockey player from Himachal at national level and has won a gold medal. 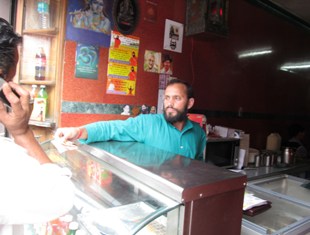 From 1996 to 2001 having been a part of the teams like under 18 Asian School hockey tournament, where they won a gold medal in  2001:, school national championship (under 17 ) in 2000 (silver medal);  school championship (Under 19 ) from 1996 to 2001 winning gold medalist five times, he says, “despite winning so many gold medals, I was not able to be a international hockey player because of family circumstances, which were so bad that I had to give up playing and there was not government support forthcoming.”

Hockey happens to India’s national game and there are many enthusiasts who are keen to pursue the sport to professional levels but lament about no support or proper facilities for it.

“Being a good player was not good enough for me to do a NIS  course that would have enabled me to qualify as a professional hockey coach, which would have got me a government job. My love for the sport would have given me the chance to coach many youngsters in the sport,” said Thakur.

Given a chance, I’m willing to even coach for free for I don’t want aspiring players dreams to end up in kitchens, he added.