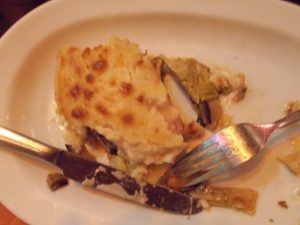 Food in Athens with some complicated names for dishes may sound Greek! But even a die-hard Indian-food buff, wanting dal-vegetable-roti-rice on the plate each day, will find the fare in Greece quite welcome, both to the eyes and palate – even vegetarians.

To sum up Greek food, it is all about fresh, seasonal vegetables, extra virgin olive oil, yoghurt, salads, non-processed cheese, a fair dose of exotic herbs and condiments, daily catch of seafood and meats of every kind.

Melizanosalata may not be a name that one can come to terms with right away. But this popular dish is made of a coarse puree of grilled or smoked eggplant, with olive oil, onions, tomatoes, garlic and herbs.

Does it not remind you of our own bharta? It tastes as well.

Imam Baildi, again with eggplant onion, chopped garlic and tomatoes as main ingredients, literally means the Turkish holy man fainted – perhaps because it was so good, he gorged a bit too much on it.

Then you have Tzatziki which is yoghurt blended with cucumber, garlic, dill, little oil and vinegar. If this brings to you the memory of our own raitas – or similar variants across India – you are bang on.

Only that the Greek make their version of the raita – or dips – slightly thicker and creamier. It’s a good accompaniment for meze, which are small dishes, hot or cold, spicy or savoury, and grilled, baked fried, or boiled.

“We eat everything. And when I mean everything, I mean every thing,” said Stephanos, an art collector and gourmet-chef, also a tour guide by passion. “Lot of our dishes are like what you have. But we use a lot of herbs and very little spice,” he said.

“It is equally fun to wash it down with some Ouzo,” he added, with a glint in his eyes, referring to the potent, traditional alcoholic drink flavoured with aniseed (saunf) that turns white and cloudy when water is added to dilute it.

Greece, or the Hellenic Republic, officially, and the same size as Tamil Nadu, has many legends. Among them Archestratos, a Greek, is said to have written the first cookbook around 320 B.C. It also has a tradition of gourmet cooking, dating 4,000-5,000 years.

Like cooking, Greece also has a long tradition of eating out. Tavernas are eating joints that are a bit more elaborate than our dhabas. Estiatorios are traditional upmarket restaurants. Both dot Athens and serve fares that are pretty affordable.

When you go to a traditional Greek restaurant, the starters are usually already laid out and will have most of these and more, including Keftedas – small fried balls of meat or vegetables and a favourite of Greek people. Like our koftas sans gravy.

There is also sometimes roundels of egg plant the way you make baigun bhaja in the western quarters of India; only that Greeks let the vegetable taste its own, then spice it up slightly with turmeric or other condiments.

One difference is that many dishes, the starters at least, are served cold, unlike the preference for hot in India.

There are also dishes like Dolmadakia — vegetables and rice stuffed in vine or cabbage leaves and steamed. It looks like what people in western India make with the leaves of yam and colocasia or Arbi.

With such a feast of dishes in front of your eyes – fresh, colourful, welcoming and also familiar – one wonders if the food in the Hellenic Republic, known from ancient times as Hellas, should sound Greek at all!