None other than a builder, transporter, police and politician nexus are at the core of the illegal mining mafia trade that is flourishing in various parts of the country.

The Himachal Pradesh chief minister Virbhadra Singh as much as admitted in the state assembly today that ‘the mining mafia enjoyed political protection.’

Young and bold Indian Administrative Service (IAS) officer Durga Shakti Nagpal having recently taken on the sand mafia in Uttar Pradesh only brought into sharp focus the illegal scramble for the building material that is eroding riverbeds, banks of streams and shaking the very foundations of well structured bridges and other infrastructure. 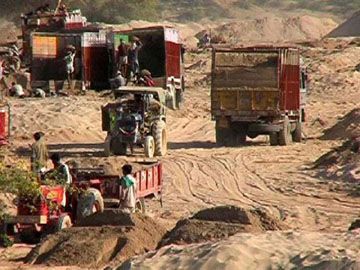 With Punjab having banned sand mining in the state, the plunder moved into Una, Solan and Sirmaur, the bordering districts of Himachal Pradesh.

A news agency report quotes, Yunus, an IAS batch mate of Durga whose official vehicle survived a murderous hit by a tractor trailer on the Nalagarh – Ropar road on August 6 that the daily illegal mining trade in the Nalagarh region was more than Rs 1 crore in value.

Scarce availability of sand and the high demand in the construction and infrastructure building sectors has already increased the prices fourfold for the material in the region.

The potentially life threatening attempt to bury Yunus’s vehicle on August 6 under illegally quarried material by the tractor trailer had led to arrest of the driver Makhan Singh, against whom initially attempt to murder (Section 307 of Indian Penal Code) was also slapped.

It now emerges that Yunus, who is the sub-divisional magistrate of Nalagarh, since March had lodged not one but six complaints to senior police officers and the state government about non-cooperation from the local police from supporting the drive that he had lodged against the mining mafia.

While there are reports that state government today has ordered transfer of a deputy superintendent of police (DySP) from Nalagarh but the belated action has not come before the opposition created a ruckus in the assembly about the government just paying lip service to its claims of getting tough with the sand mafia.

The division between the police and the administration in containing the problem in Nalagarh, as reported in the media, was relied upon the opposition to nail the government and prod it to action.

And the icing on the cake is that even after a vehicle of a sub-divisional magistrate belonging to the IAS cadre is hit three times by a tractor trailer on a road, the police after carrying out the investigation drop the attempt to murder charge against the driver arrested in the case.

Makhan Singh walked out of jail yesterday as the local court granted him bail after the police dropped the attempt to murder charge.