Shimla: Elected members of the state assembly raised concern about the increased seepage in the 3 Km long Largi Aut tunnel on the national highway that could cause a cave in and a road blockade to the popular tourist valley.

Drawing the attention of the government through a call attention motion, Karan Singh, a congress legislator from Banjar valley in Kullu said, “since the start of the monsoon season there has been large scale seepage in the Largi Aut Kullu tunnel and it could cause it to collapse anytime.”

The tunnel that was constructed to divert the highway when a medium sized hydroelectric power project nearby dammed River Beas and the old alignment of the road got submerged, a few years ago.

“There is heavy traffic moving on the highway that passes through the tunnel and the three kilometre distance of the tunnel is full of risks for not only is there insufficient lighting, poor ventilation with heavy smoke enclosed inside the tunnel but should there be any cave in because of the seepage, there is hardly any mechanism to carry out rescue operations,” Karan Singh pointed out. “It is a disaster in waiting,” he warned.

Responding to the legislators concerns, chief minister Vibhadra Singh, who holds charge of public work ministry, said that though the horseshoe shaped tunnel on the national highway was thrown open on 6th August, 2006 but the National High Authority of India (NHAI), which maintains rest of the Chandigarh – Kullu – Manali highway, has not taken over the Largi-Aut tunnel and was reluctant to maintain it.

“In the rainy season, the hill above the tunnel gets fully water charged and is saturated to a point that excess water begins to seep in through cracks and crevices,” said Virbhadra Singh. However, the chief minister ruled out any possibility of the tunnel collapsing and said that seepage in the tunnel was a normal and natural process that could not be avoided.

The tunnel was constructed to approved specifications and strengthened with 9 meter long steel anchor bolts and suitable steel ribs support systems with back filled concreting, he said. The geologist recommendations regarding required safety measures were taken into account, he added. 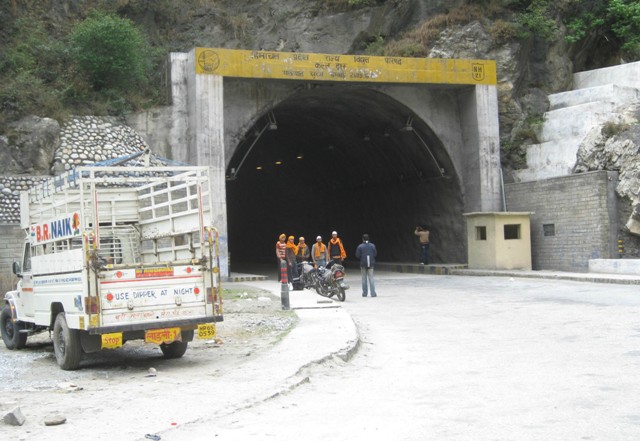 At the same time he mentioned that Himachal Pradesh State Electricity Board (HPSEB), the agency which operates a hydropower project in the vicinity and was responsible for construction of the road tunnel, had taken up handing over the tunnel maintenance and  responsibility to NHAI but they were reluctant to take possession of it.

Despite there being no provision in the state budget to maintain this tunnel, the state government had spent Rs 1.25 Cr in five years towards operation, maintenance and security of the tunnel, he said.

The state electricity board has approached the state government for either handing over the tunnel possession to HP public works department or NHAI for its upkeep, the chief minister said.

Kullu legislator Maheshwar Singh demanded that an alternate road besides the tunnel approach needed to be constructed.

The Devi’s and Devta’s (Gods and Goddesses) were not venturing inside the tunnel said Maheshwar Singh.

To get to Kullu they have to wait till the rains end and water level in the Largi Dam falls, which opens up an alternate footpath that allows the deity palanquins to pass through without having to go through the tunnel, he said.