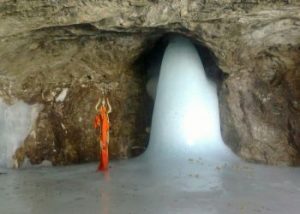 Around 300 pilgrims and seers attended the season’s final prayers inside the Himalayan cave shrine of Amarnath today.

The cave shrine is situated in Kashmir Himalayas at a height of around 13,000 feet above sea level.

Swami Dipendra Giri, custodian of Lord Shiva’s holy mace known popularly as the ‘Chhari Mubarak’, arrived with the mace at the cave today morning to herald the end of this year’s Yatra.

“The Puja has been completed with traditional devotion inside the holy cave shrine this morning,” Swami Dipendra Giri told.

“Around 300 devotees attended the Puja. We are now on our way back with the Chhari Mubarak,” he added.

Fear among the devotees in the aftermath of Uttarakhand tragedy is believed to be responsible for the lesser number of pilgrims for the Amarnath Yatra this year.

The passage of Yatris was strictly regulated by the authorities this year following directions of the Supreme Court. No unregistered pilgrim was allowed to undertake the Yatra this year.

Registered pilgrims were allowed to perform the Yatra only on the days scheduled in their registration.

Fourteen pilgrims died of natural causes during this year’s Yatra, which started June 28 and ended Aug 21 coinciding with Raksha Bandhan.

Traditionally state Governor N.N. Vohra, who is also the chairman of the Shri Amarnathji Shrine Board (SASB) that manages the affairs of the Yatra, would attend the Puja at the cave shrine on the last day of the pilgrimage.

Sources in the SASB said Vohra could not proceed to the cave shrine because of bad weather in the area.

The state government had made elaborate arrangements for the security and healthcare of the Yatris.

Besides the two base camps at Nunwan (Pahalgam) in the south and Baltal (Ganderbal) in the north, three transit camps were set up for this year’s pilgrimage.

A three-tier security ring manned by the army, the paramilitary and the state police provided security to the Yatris at the base camps and along the routes to the holy cave.