Dharamsala: Tibet supporters from all over Asia will hold a rally in New Delhi on Aug 26 to express solidarity with the Tibetans suffering repression in China, organisers said yesterday. 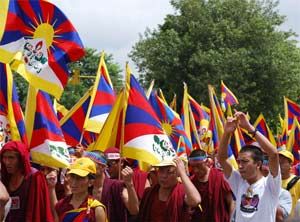 More than 2,000 Tibet supporters are expected to take part in the rally at Jantar Mantar to express concern and support for the cause of Tibet, an organiser told.

The rally is being organised by the Asian Tibet Support Groups and facilitated by the Core Group for Tibetan Cause-India.

The organiser said the aim of the rally would be to highlight the wave of self-immolations that has swept Tibet and the need to preserve Tibet’s fragile ecosystem which is being destroyed by the Chinese regime, causing great threat to the whole world, particularly Asian countries.

Since 2009, a total of 120 Tibetans have set themselves on fire in Tibet, calling for the return of the Dalai Lama to the region and freedom for Tibetans, said the Central Tibetan Administration, the democratically-elected government of Tibetans in exile, which is based here in Himachal Pradesh.

The Dalai Lama fled Tibet along with many of his supporters and took refuge in India when Chinese troops moved in and took control of Lhasa in 1959.