Srinagar: Normal life in this Jammu and Kashmir summer capital and other major towns of the valley was partially affected today due to a shutdown called by separatists. 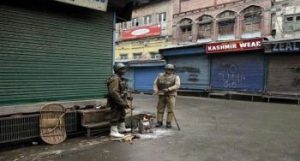 Shops and other businesses and educational institutions were closed, but both public and private transport moved on several roads despite the shutdown.

Additional deployments of police and Central Reserve Police Force (CRPF) personnel has been made as a precautionary measure to maintain law and order.

Police said no untoward incident has been reported from anywhere in the city or elsewhere so far.

Reports from other major towns also said life was partially affected because of the shutdown.

Separatist leader Syed Ali Geelani called for the protest shutdown against the Kishtwar communal riots and to press his demand for disbanding the village defence committees (VDCs) in Jammu region.

In a statement yesterday, Geelani termed the VDCs “the terrorist section of the Sangh Parivar”.

The VDCs were formed by police to combat militant threats. Weapons were provided to civilians in far-off villages for self-defence against guerrillas.

Separatist leaders have questioned the role of the VDCs, alleging that during the Kishtwar clashes members of those committees used the weapons issued to them.