Sonipat (Haryana): A massive 72’X48′ tricolour weighing 48 kg will be hoisted atop the 63 metre-high flag post at the O.P. Jindal Global University here on Independence Day. 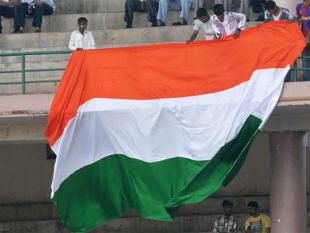 Fabricated in polyester for Rs.48,500, the flag can be spotted even a kilometre away, says the university.

It’s arguably the biggest flag and the highest flagpost in India. Its closest rival is a 46-metre high flagstaff built by the East India company at Fort St George in Chennai, then Madras, in Tamil Nadu, NGO Flag Foundation of India (FFI) says.

The NGO, run by Naveen Jindal, Congress MP, will be hoisting the giant tricolour for the first time, though it has been staging such ceremonies, albeit with smaller flags, at places like Kargil in Jammu and Kashmir since 2009.

Jindal had won a historic order from the Supreme Court permitting ordinary citizens to fly the tricolour. Earlier, individuals could hoist the tricolour only on Independence Day and Republic Day (Jan 26). Jindal is the son of industrialist O.P. Jindal who died in a helicopter crash in 2005.

“This is the fifth consecutive year we will be hoisting the flag on Independence Day but the first time it is so huge. It is an initiative by FFI to spread awareness about the national flag. People who see such massive flag will always be curious and any citizen will feel proud seeing such massive tricolour flutterng in the wind,” university official Kanika Jhamb said.

Three separate polyester bands of saffron, white and green, with the Ashok Chakra in the centre, were stitched together over a one-month period to create the giant flag.

“Such a huge flag can only be hoisted or lowered through a motorised mechanism, with each operation taking 10 minutes,” Jhamb explained.

The flagpost has a two-metre diameter base that incorporates a steel box in which the flag will be carefully stowed every evening.

“The flag will be hoisted at the university on Thursday by Sead Avdic, the ambassdor of Bosnia and Herzegovina,” the varsity official said.