Srinagar: Explosive batsman Yusuf Pathan feels that if given adequate opportunities, Kashmir has enough talent to produce the best cricketers of the country. 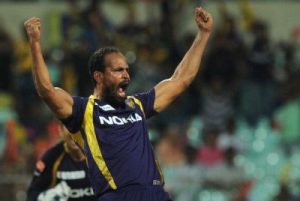 “Kashmir has enough untapped talent to produce some of the best cricketers in the country and all they need is adequate coaching and facilities,” Pathan said here yesterday after releasing the Downtown Champions League (DCL) logo which starts here in September.

Pathan also talked about his chances of returning to the India team.

“I assure you I shall be back in the Indian team within six months,” Pathan added.

Due to the league many youngsters, otherwise seen aiming stones at security forces during clashes, would now be honing their aiming skills to hit the wickets during the matches.

“It is a very encouraging beginning for the league that somebody like Yusuf Pathan has come personally to bless the league,” DCL president Sheikh Ashiq said.

The 12-team league will start in September.