Jammu: Although curfew continued for the 13th day today in the hilly Kishtwar town of Jammu region, wracked by communal violence Aug 9, sources in the visiting all-party delegation held out hopes of a breakthrough in peace talks later in the day between the two communities. 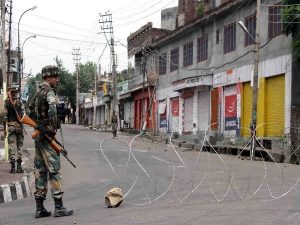 The all-party delegation, comprising representatives of the ruling National Conference-Congress alliance, the Bharatiya Janata Party, the Bahujan Samaj Party, the Samajwadi Party, the Nationalist Congress Party, Communist Party of India-Marxist, Shiromani Akali Dal and Panthers’ Party, has been camping in the town for the last two days.

“The representatives of both communities were scheduled to meet us jointly yesterday evening, but that meeting is now expected today,” a member of the all-party delegation told.

Sources in the district administration said curfew could be relaxed to facilitate the peace march.

“We are expecting re-opening of shops and other businesses in the town once the peace march is held,” district administration sources said.

With regard to the demand of the minority community seeking transfer of some senior police and civil functionaries who are alleged to have acted in a partisan manner during the Aug 9 clashes in Kishtwar, the all-party delegation requested the people to wait for the findings of the judicial probe ordered into the clashes by the state government.

“Anybody indicted by the judicial probe for dereliction of duty or for acting in a partisan manner during the discharge of duty would be severely punished, the representatives were assured,” a member of the all-party delegation said.