Dehradun : The last official headcount of tigers in the country was put at 1701. This was as per a census held about three years back in 2010 and with a lot of pressure on  the tiger havens and a debate raging whether they should continue to remain open for tourists, the Wildlife Institute of India here, has been asked to do another head count of the king of the jungle.

Informed sources said that according to official figures it is generally believed that about 225 big cats died in the last three years – 2011, 2012 and 2013. The deaths were due to old age, poachers and smugglers of tiger parts. A death of a tiger in the Rajaji National Park area of Uttarakhand was due to poisoning of the feline by a van gujjar to avenge the killing of miclh cattle. 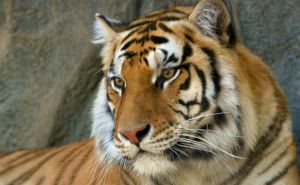 They said that the tiger habitat is spread over 32135 sq kms in Uttarakhand, Uttar Pradesh, Madhya Pradesh, Rajasthan, Gujerat, Maharashtra, Orissa, Tamil Nadu, West Bengal, Karnataka, Jharkhand, Bihar, Chatisgarh, Kerala, Andhra Pradesh, Assam and Mizoram. “As such it is not a small exercise and the forest departments of all these states will be involved”, they added.

Asserting that more than 40,000 forest department employees of various stets would be involved in the exercise being undertaken by the Wildlife Institute of India, informed sources said that all those involved in the head count will be given a months training starting Sept 1, so that the figures are as accurate as possible.

Besides the 42 tiger reserves in the country, the count will also ne held in some reserve forest areas, where the felines, being territorial animals have reportedly spilled over to mark their territory and in search of prey. Some of the reserves like the Rajaji National Park are rich in herbivore population and it is said that it has of late become home to three tigers.

While admitting that the number of deaths of the felines in the last three years had been on the higher side and there could be quite a few deaths that may have gone unreported, sources, however, expressed the hope that the numbers would perhaps be more than the 2010 count. “We are presuming this as cameras installed in the tiger reserves have shown quite a large strength of cubs with full grown tigers, which is a positive sign”, they claimed.