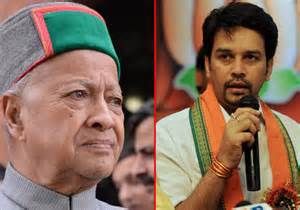 He said that more skeletons will emerge from the HPCA cupboards investigations progress.

“The HPCA has committed a big fraud with the people of the state and the government. It’s not the right time to reveal details (about the ongoing investigations),” said Virbhadra Singh.

“I also want that cricket should flourish but they have betrayed the trust of the people and have tried to throw dust in their eyes,” he said.

“Even the HPCA has allowed the players from Punjab to represent the state in Ranji trophy with fake Himachal domicile certificates. Stunning facts (about the working of the HPCA) will come to the fore very soon,” the chief minister said.

Officials said during a recent investigation, the vigilance bureau found that the Kanpur address was bogus.

HPCA, whose lone international cricket ground is located in picturesque hill station of Dharamsala, some 250 km from here, was initially registered with the Registrar of Companies, in Kanpur in July 14, 2005. It was later shifted to a Chandigarh address in 2011, said an official.

The chief minister said “now we are investigating its Chandigarh address”.

Investigations against the HPCA started after Congress came to power in the state government last year in December.

Earlier this month, a cheating and misappropriation case was registered against the HPCA over alleged wrongdoing in the allotment of land to the sports body.

The disputed land, some three km away from the stadium, has been used by the HPCA to build a five-star residential complex called The Pavilion, which has 38 rooms, 32 huts and a high-tech gym. The HPCA website calls it the “exotic residential resort”.

The land was allotted when the BJP government, headed by Prem Kumar Dhumal, was in power in the state. Thakur, who is also Dhumal’s son, had alleged that the case against HPCA is politically motivated. Thakur is also a joint secretary in the Board of Control for Cricket in India (BCCI).

But sources told that HPCA has sub-leased the residential complex of its state-of-the-start stadium to a company for commercial use.

On July 26, two Indian Administrative Service (IAS) officers — Deepak Sanan and R.S. Gupta — were charge-sheeted by the state government for allegedly allowing the change in the land-use for building the HPCA complex.