Shimla: When IAS officer Yunus Khan took on a mafia mining sand from riverbeds in Himachal Pradesh, little did he realise that there would be attempts to kill him. 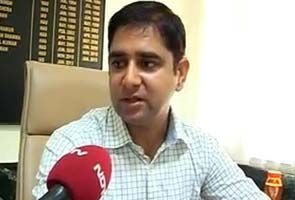 Khan, 33, said today that the Wednesday attack on him was the third attempt on his life in six months.

The attempts began after Khan intensified his drive against illegal sand and gravel miners in Nalagarh in Solan district bordering Punjab.

So far, say officials, Khan, the sub-divisional magistrate in the area for six months, has issued compoundable fines amounting to over a whopping Rs.1 crore.

“In March alone he imposed fines for Rs.40 lakh. He has booked around 15 people, some of them prominent sand miners, and impounded over 350 vehicles,” said an official of the industry department.

Khan told that he “was getting regular signals for quite some time (from the mining mafia) that I will soon be transferred out of the area”.

A 2010 batch IAS officer, Khan was posted in Nalagarh as SDM Jan 31. He was earlier in Una as assistant commissioner (development) for five months.

He said this was the third attempt on his life.

“Before this, the mafia tried to eliminate me twice, first in June-end and then in July.”

The official says he has the government’s backing in his crusade against those pilfering sand illegally.

“There is no pressure on me from any quarter against the drive.”

Commenting on the enormity of the illicit trade, which mostly meets the requirements of neighbouring Punjab, Khan said: “The daily turnover of this trade in this area might be approximately Rs.1 crore.”

From time to time, he was communicating to his top bosses about the huge tax evasion from this illicit trade.

Khan had a narrow escape when a tractor-trailer tried to ram his official vehicle thrice while he was checking illegal quarrying early Wednesday.

“After that, the tractor driver tried to dump the gravel from the trailer on the official vehicle,” a police official said.

Official sources said Khan’s drive against the mafia has upset some of his own colleagues.

But Khan has vowed to battle the mafia whereever he is posted.

Khan is a batchmate of Durga Shakti Nagpal, an IAS officer who has been suspended by the Uttar Pradesh government.

The suspension of Nagpal, who took on the sand mafia in Uttar Pradesh’s Gautam Budh Nagar district, has triggered a storm.

The Uttar Pradesh government, however, says she was suspended because she ordered the razing of a mosque wall.