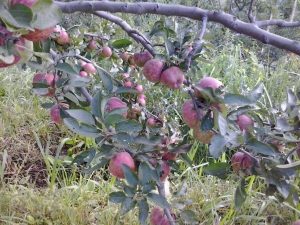 Launching the Sustainable Development of Apple project here, the chief minister said it would undertake strategies for improving productivity and quality of apple orchards.

The project, being implemented under corporate social responsibility work of Container Corporation of India Ltd (CONCOR) through The Energy and Resources Institute (TERI), in Shimla, Kullu and Kinnaur districts, would lay emphasis on training and capacity building of farmers, he said.

“It would benefit about 1,500 apple growing households directly while 1,000 households would be benefited indirectly,” the chief minister.

Apples are the mainstay of the state’s economy, with more than 200,000 families engaged in its cultivation of the fruit.

Out of 12 districts, apple is commercially being cultivated in six districts. The state grows about 38 percent of the country’s apple crop.

Singh said though the area and production of apples had registered an increase, the productivity remains low as compared to advanced countries.

“The productivity of apple in the state ranges from six to 11.5 metric tonnes per hectare in comparison to 35 to 40 metric tonnes in advanced countries,” he said.

To improve post-harvest infrastructure in the state, the chief minister said private investment is being encouraged for establishment of procurement and controlled atmosphere stores.

As per the estimates of the horticulture department, the state is heading for a bumper apple harvest this season after two consecutive years of less than normal yield of 2.50 crore boxes.

A production of over 3.50 crore apple boxes of 20 kg each is expected, which is approximately 7.65 lakh tonnes, said a government spokesperson.

The area under apple cultivation in the state has increased from 3,025 hectare in 1960-61 to 1.04 lakh hectare in 2011-12 which constitutes more than 48 percent of the total area under fruit production.