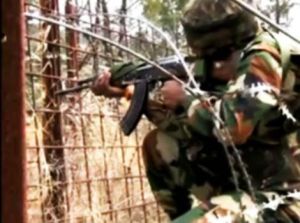 Even as Pakistan denied any involvement in the post midnight attack in Poonch sector, Indian leaders used tough language to denounce the killings with Congress president Sonia Gandhi saying India won’t be “cowed down by such blatant acts of deceit”.

“The entire Congress as indeed the entire country stands by them,” she said in statement, and asked the “government to take appropriate action”.

A Non-Commissioned Officer and four soldiers were killed when the attackers, including men in Pakistani military uniform, barged into Indian territory and ambushed an army patrol at Chakan-da-Bagh sector of the Line of Control (LoC), which divides Kashmir between India and Pakistan.

The attack took place around 400 metres inside Indian territory. A wounded soldier was airlifted to Jammu for specialized treatment. A source in Jammu told that the Pakistanis withdrew after the killings.

It was the worst border clash in Kashmir after January when two Indian soldiers were killed in Mendhar sector of the LoC. One of the soldiers was then beheaded while the body of the other was mutilated.

The latest killings sparked off angry responses in India, where there have been high expectations from a possible meeting between Prime Minister Manmohan Singh and his newly elected Pakistani counterpart Nawaz Sharif on the sidelines of the UN General Assembly in September.

Defence Minister A.K. Antony told the Lok Sabha that about 20 “heavily armed terrorists” and others in Pakistani military uniform were involved in the bloody ambush.

The Bharatiya Janata Party (BJP) asked the government not to talk with Pakistan.

Senior leader Arun Jaitley said India should give “a befitting reply”. His colleague M. Venkaiah Naidu accused the government of being “very soft on Pakistan”. Naidu asked the government to end all talks with Pakistan.

Another BJP leader, Shahnawaz Hussain, added: “Talks with Pakistan should not be held.”

Samajwadi Party leader Mulayam Singh Yadav, a former defence minister, said both Pakistan and China were not to be trusted. He asked: “We want to know what the government is doing to thwart such attacks.”

Jammu and Kashmir Chief Minister Omar Abdullah warned that such “incidents don’t help efforts to normalise or even improve relations with Pakistan”.

Before Gandhi’s statement, Minister of State for Home R.P.N. Singh said the killing of Indian soldiers was “unfortunate” and would not help better ties with Pakistan.

In Islamabad, the military denied killing the Indian soldiers. “No such incident has taken place on the LoC,” an official with the army’s Inter-Services Public Relations said.

Later, the foreign office came out with a strong denial of Pakistani official’s complicity in the ambush.

“Pakistan rejects allegations … of an attack across the LoC in Poonch sector in which five Indian soldiers were claimed to have been killed,” it said.

“These are baseless and unfounded allegations. Our military authorities have confirmed there had been no exchange of fire that could have resulted in such an incident,” it said.

Pakistan “remains committed to the ceasefire agreement of 2003 which is an important Confidence Building Measure and should be respected in letter and spirit.

“Pakistan is committed to a constructive, sustained and result-oriented
process of engagement with India, and looks forward to an early resumption of the dialogue process.”

Since 2003, when India and Pakistan declared a ceasefire, guns have mostly been silent on the LoC. But troops of the two countries sometimes exchange fire.