Jammu: Curfew continued for the 12th day today in Kishtwar town of Jammu and Kashmir. Police said they have recovered nine guns looted from a gun-shop by rioters on Aug 9. 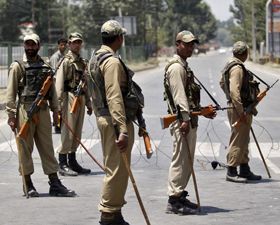 Curfew was relaxed for four hours yesterday, during which the situation remained peaceful with no report of any untoward incident.

Kishtwar District Magistrate Basheer Ahmad Khan said curfew was relaxed for two hours in one portion of the town and for another two hours in the other portion.

“The situation remained completely peaceful during the curfew relaxation period,” he said.

Police in Kishtwar have recovered nine of the 22 guns looted from a local gun-shop by rioters in Kishtwar Aug 9.

Some people have been arrested in this connection, police told.

The delegation is scheduled to meet representatives of the majority community today.

The main opposition party in the state, the People’s Democratic Party (PDP), did not participate in the all-party delegation, with its leaders claiming that they were kept out of the delegation by the NC-Congress ruling alliance.

An official statement by the administration, however, said all political parties had been advised that the delegation would leave for Kishtwar from Jammu at 8 a.m. yesterday.

“All those leaders who came to the departure venue were included in the delegation,” the statement said.