Dammit! No out-takes!! Is this really a Rohit Shetty film? Every film of the “Gol Maal” director has so far ended with out-takes giving us entertaining glimpses from during the making of the film. Here those trademark Shetty out-takes are replaced by a Honey Singh track which celebrates Rajnikanth and the lungi. 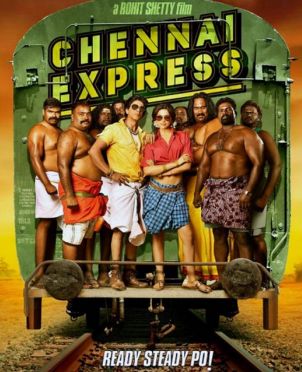 The rest of the film resembles those typical sambar-and-sandalwood creations by K. Raghvendra Rao, and worse still, Raj Kanwar’s “Dhai Akshar Prem Ke” where Aishwarya to escape her parental wrath at her elopement, introduces to her family a man she has just met as her soul-mate.

Of course, there are the flying cars exploding in the air to make sure we know that all said and drummed, this is a Rohit Shetty presentation.

Packaged with pickled precision, peppered with just the right doses of naughty jokes and precocious pranks that go well with Shah Rukh’s 40-year-old brat’s act, “Chennai Express” is the kind of non-toxic comic entertainer where the most damaging double-entendres you’d get is a Tamil word that sounds like Angelina Jolie’s name.

That brings me to another major hurdle in the heap of hilarity that Shetty builds so meticulously in the first-half.

The generous outflow of Tamil that seems initially engaging (more so, since Shah Rukh shares our non-comprehension of the rapidfire Tamilian cloudburst that accompanies Deepika’s quicksilver character) begins to come in the way as the narration grows older and runs out of energy.

But then there is the sprightly Deepika as the runaway Tamilian girl who piles on to the North Indian mithaiwala stranger to escape marrying the boorish fiancee back home in her village in Tamil Nadu.

We’ve seen Kareena Kapoor do the chirpy runaway train traveller in “Jab We Met”. Deepika brings a special filtered-coffee flavour to her chirpy character. Even that broad hammy accent grows on us.

Yes, we like! Here she is is the only Rohit Shetty team member (and I use the term ‘team’ since Shetty generously credits the direction to himself and his team) who seems to have a firm grip over her rudderless dithering character.

Deepika plays Meena Amma with flavourful flourish. She is specially delightful in three key sequences, two of them comic and the other unexpectedly sombre.

In the sequence where her character turns into a sleeping, kicking and convulsive zombie, she’s unbelievably goofy. It’s not just Shah Rukh who gets a kick out of that scene.

Would Rohit Shetty please do a full-fledged out-and-out comedy with Deepika? That, “Chennai Express” is not. It is a half-hearted but laugh-hearted effort that makes the fatal error of taking itself too seriously.

Towards the end when the utterly shammed climactic fight ensues, we even have a long speech by Shah Rukh on the social status of the girl child.

As we squirm at the attempt to turn comedy into a serious business we look back at the rest of the film with some amount of warmth and affection.

Some of the long shots of the train winding through green acres is breathtaking. And Shah Rukh’s first meeting with Deepika’s father over a bridge over a fast-flowing river is shot with amazing brio.

There’s a wonderfully-shot sequence where Shah Rukh has to carry Deepika to a temple over hundreds of steps. Deepika here goes from amusement and mockery to a sense of belonging and pride in her man’s arms. It’s a moment built with care and love.

But then, such tender affection really has no place in this comedy of cultural dispossession where the Punjabi boy Rahul gets embroiled in Tamil girl Meena’s family affairs and comes out… well not quite wiser. But filled with self-mocking laughter.

Shah Rukh pokes a whole lot of good-natured fun at his now-aging lover-boy persona. There are tongue-in-cheek references to “Dilwale Dulhaniya Le Jayenge” and several other Shah Rukh Khan films and songs including the introductory South Indian lines from the “Jiya jale” song in “Dil Se”.

All these self-tributes work better than what Puri Jagganath did with the Bachchan persona “Buddha… Hoga Tera Baap”.

Rohit Shetty is more in command of his canvas here than in his last comedy “Bol Bachchan”. But the self-deprecatory laughter is still not good enough. Somewhere you feel the one-line plot (okay, if not one then two-line plot) is stretched into an unwelcome second-half where nothing really happens. Even the humour tracks stops short beyond a point.

But there is some genuine steam and spark in the early part of “Chennai Express”.

Towards the beginning of the train journey when Deepika and Shah Rukh play a kind of antakshari of Hindi film songs to put the goons off her trail, Deepika completely overshadows her kingly co-star, who should be okay with being upstaged by his female co-star.

After all he has given Deepika priority over his own name in the credit titles. And Deepika takes the lead very seriously. She has never looked better and never been funnier on screen without even trying too hard.

But then the plot and the situations let her down. The antakshari-speak that was amusing in the beginning recurs during a stale fight sequence in the second-half.

We are no longer laughing. Not when Shah Rukh’s purported big chase sequences end in embarrassing deadends. Not when an item song with incoherent words and even more misguided logistics pops up like a joke whose punchline has gone missing.

Through all of this, Shah Rukh Khan braves it with a delicious sense of self-mockery bordering almost on a masochistic absence of heroic pride.

Yes, he likes it when the joke is on him. But that happens once too often here.

So it’s finally here. The film that all Shah Rukh Khan fans (which covers half the hemisphere) has been waiting for. The good news first. “Chennai Express” is a pleasant and likable film in parts. The bad news is, it does nothing for Shah Rukh Khan’s imdomitable star power except to tell us he can still play a 40-year Rahul without faltering.

That we already know.