Toronto: To mark India’s 67th independence day, a street in the Canadian city of Winnipeg has been named after Mahatma Gandhi.

A portion of York Avenue leading to the Canadian Museum of Human Rights in Winnipeg, capital of Manitoba province, got the new name yesterday. 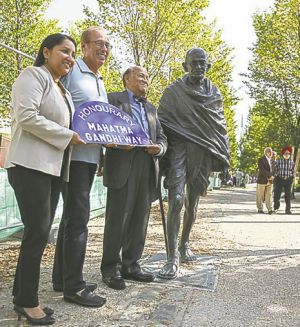 “It is only fitting that Mahatma Gandhi Way leads to the Canadian Museum for Human Rights, devoted to promoting respect for others and encouraging reflection and dialogue,” Winnipeg Mayor Sam Katz was quoted as saying in media reports.

Winnipeg councillor Devi Sharma, K. Dakshinamurti, president of the Winnipeg-headquartered Mahatma Gandhi Centre of Canada, and members of the Indian community in Winnipeg attended the event.

“Today’s event is a great significance to all who seek wisdom and find inspiration in Mahatma Gandhi’s words,” Sharma said.

“Gandhi’s deeds and teachings touch people from all walks of life, in all corners of the world.”

Sharma said the naming was done at the request of the Mahatma Gandhi Centre of Canada.

Incorporated in 2007, the Centre is a Canadian national organisation with membership spanning the country’s entire ethnic and cultural mosaic.

Former Manitoba Lt Governor John Harvard and former governor-general of Canada Edward Schreyer are the founding patrons of the Centre.