Dehradun : With no let up in the rains, there intensity actually increasing in the last 24 hours, and the weatherman predicting that they could continue for another 48 hours, the state government is concerned on the safety of the rescue team that had been air dropped in Kedarnath on June 4 to undertake the last rites and collect the DNA samples of the bodies lying there.

With reports last reaching the state headquarters that some members of the team were sick and they were abysmally low in ration, efforts were being made for the last two days to air drop ration and if possible bring back some of the sick members of the team. But heavy rains and heavuily over cast skies have prevented any such moves. 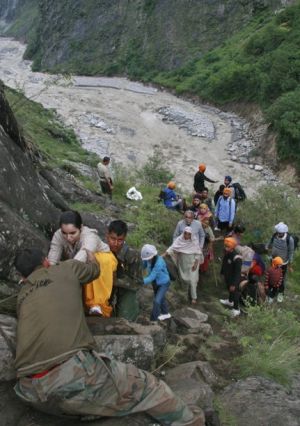 Informed official sources told Hill Post that the state government was now deeply concerned about the safety of the 74-member team, which includes, doctors, police personnel, PWD engineers and others, as it had been there for more than what had been earlier stipulated.

“In fact chief minister Vijay Bahuguna had a meeting with senior officials in the matter to discuss the issue”, they pointed out.

They said that a team had been sent on foot on Sunday but being a longer route it was expected that they would reach there some time latest by Monday. But now word had come from the team, that it too had been stranded way short of Kedarnath because of the heavy rains and inclement weather conditions, which had stopped its progress to the shrine town.

Sources said that efforts were being made to send another team on foot as there are no chances of any helicopters, either of the Air Force or private companies from making the trip to Kedarnath and air dropping ration there. More than ration what is worrying the state authorities is the fact that some of the team members are sick and in low morale.

In fact the rains have been so heavy that while the Dehra Dun district authorities have closed all schools, both private and government, for the next two days, that is Tuesday and Wednesday, they have spread real panic in the higher districts of the state, specially townships and hamlets located along the rivers.

According to reports reaching the state headquarters, with the memories of the severe loss of life and damage to property in the recent floods in the Kedarnath valley still haunting them, people have started literally fleeing their homes and taking shelter at safer places.

The district authorities have already issued warning of heavy rains and asked people to move out of the low lying areas, even as a number of landslides and landslips have only added to their woes.

Meanwhile almost all the choppers that had been pressed into service to ferry ration to the hundreds of villages that have been completely cut off remained on the ground today, as none could take off because of the heavy rains. There are fears that the food position in some of the villages could be really bad, but there is now ay of ensuring that supplies are somehow sent to them as the road links to these villages are also snapped.