Shimla: The hills of Himachal Pradesh continued to experience moderate to heavy rains today and all the rivers and their tributaries were in spate, officials said here.

Heavy rain badly hit a village near Mandi town, triggering flashflood-like conditions there. There was no loss of life, however. 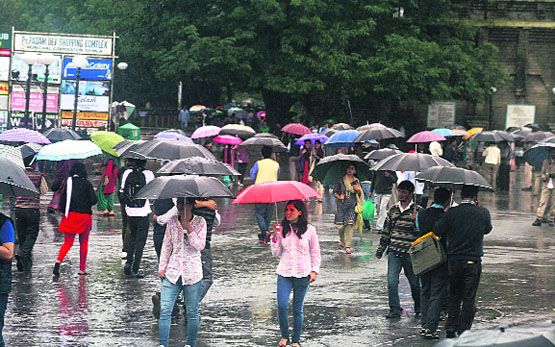 “There are chances of heavy to very heavy rainfall at isolated places in the state till tomorrow,” meteorological office director Manmohan Singh told.

He said most of the areas in the state, particularly Shimla, Solan, Kullu, Sirmaur and Mandi districts, have been experiencing moderate to heavy rainfall.

“Half a dozen cattle sheds and government buildings were partially damaged. There are reports that five heads of cattle perished. The link road to the village has been wiped out,” he said.

A government spokesperson said Satluj, Beas and Yamuna rivers and their tributaries have been in spate in Kinnaur, Shimla, Kullu, Mandi, Bilaspur and Sirmaur districts.

“We have advised people settled along the banks of rivers to move to safer places,” an official said here.

The Pandoh diversion dam is located on the Beas river in Mandi district. It diverts excess monsoon water towards the Pong dam. Otherwise, it diverts water towards the Satluj river which feeds the Gobind Sagar reservoir of the Bhakra dam.

However, the inflow of water into state’s Pong and Bhakra dam increased dramatically due to heavy rainfall, but the authorities said there was no need for worry as the reservoirs still have surplus capacity to withhold additional water.

The water level in the Bhakra dam and the Pong dam reservoirs stood at 1,623.85 feet and 1,330 feet, respectively, yesterday, an official of the Bhakra Beas Management Board (BBMB), which manages both the dams built on the Punjab-Himachal border, told.

The monsoon enables both dams, which serve the irrigation requirements of Punjab, Haryana and Rajasthan, to store water.

Officials said more showers in the state could aggravate the flood-like situation in neighbouring Punjab and Haryana.

All the major rivers of the hill state — the Satluj, Beas and Yamuna — enter Punjab and Haryana.