New Delhi:  Battling all odds, paralympian Devendra Jhajharia scripted history for India as he gave the country its maiden gold medal in the World Paralympic Championships in the javelin throw (F-47 category) event in Lyon, France.

According to information received here, the 32-year-old Devendra, whose left arm was amputated after an accident, won the gold medal Sunday by hurling the javelin to 57.04 metres, his personal best performance. 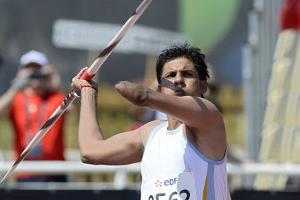 An elated Paralympic Committee of India (PCI) president Sultan Ahmed announced a cash award of Rs.5,00,000 for Devendra, who recently was adjudged with the Padma Shri.

“I think Devendra’s gold medal will boost the paralympic athletes in the country. We have a huge wealth of talent in the country and we have to support them. We are thankful to the sports ministry and the Sports Association of India (SAI) for all support they gave to the athletes for training purpose,” said Ahmed, an MP from Trinamool Congress.

Devendra, who hails from Rajasthan’s Churu district, which is the gateway to Thar desert, also has the world record in the F-46 category to his name when he hurled the javelin to 62.15m in Athens Paralympics in 2004.

Son of Ram Singh, a farmer, Devendra was passionate about sports from his school days and used to train in the searing Thar-desert heat.

“Sport is where an entire life can be compressed into a few hours, where the emotions of a lifetime can be felt on an acre or two of ground, where a person can suffer and die and rise again on six miles of trails through a park,” said Devendra in a statement.

It was in 1997 that Devendra was spotted by his coach Ripudaman Singh Aulak, a Dronacharya Awardee in javelin, and he shifted to the nearby town of Kasab for better training facilities. From there he never looked back and was soon training at National Institute of Sports (NIS) Patiala.

“Sport is a theatre where sinner can turn saint and a common man can become an uncommon hero, where the past and the future mix with the present,” said Devendra.

Devendra thanks Indian Railways who allowed him to practise throughout the year, but is frustrated with the apathy of the corporate sector.

“I asked for sponsorship 3-4 times but they weren’t responsive. So I left pursuing them. I think that the private sector has more money and resources to invest in sports unlike the state and central governments but unfortunately the former hardly reciprocates when we approach them,” he said.

Devendra feels that para-athletes don’t get their due in India.

“I am the sole gold medallist in javelin. But the status of this game has not improved yet. To me both the Olympics and the Paralympics share a similar status. But in case of normal Olympics medallist the pension is of Rs.10,000 while the paralympic winners get just Rs.5,000. Moreover, there are 101 olympic winner who are supposed to get pension from the government but around 50 of them don’t get it at all,” he said.