Srinagar: Over 140,000 pilgrims have so far performed this year’s Amarnath Yatra, which started here June 28, an official said today.

“The Yatra has been proceeding normally. Till today (Monday) morning, around 140,000 pilgrims had darshan inside the holy cave since June 28,” said an official of the Shri Amarnathji Shrine Board (SASB). 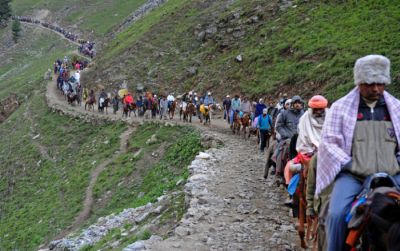 “Three pilgrims died of natural causes during this period. The directions of the Supreme Court are being strictly followed with regard to the passage of the pilgrims, healthcare facilities provided to them and also the number of pilgrims allowed to proceed towards the cave from Baltal and Nunwan base camps,” said the official.

The official said the number of pilgrims arriving here daily was less than those who came during this period last year, linking it to the Uttarakhand tragedy.

Interestingly, the pony owners in the north Kashmir’s Baltal and south Kashmir’s Nunwan base camps are disappointed because of many reasons this year.

The pony owners have traditionally been carrying old and infirm pilgrims to the Himalayan cave shrine situated at 12,500 feet above the sea level in Anantnag district.

Since the court has capped at 7,500 the number of pilgrims that are to be allowed daily towards the cave shrine from the each base camp, pony owners say their business has suffered a severe jolt.

The fact that helicopter services are available to ferry pilgrims to the shrine also appears to have hit the pony owners’ business.

“The helicopter charges Rs.2,800 per pilgrim from Baltal base camp to the cave shrine and back while the ponywallahs charge you at will,” said Suresh Kumar, 35, a pilgrim from Uttar Pradesh.

“The time and inconvenience one saves by using a helicopter is also a big consideration for not opting for the ponies,” he added.

The local weather office has been issuing daily morning and evening bulletins for the pilgrims on conditions expected around the highways and the path to the shrine.

The three transit camps are at Manigam in north Kashmir, and Walnut factory and Mir Bazar in south Kashmir.

The uphill trek from Baltal to the shrine is 14 km long and allows pilgrims to perform the Yatra and return to the base camp on the same day.

The south Kashmir’s traditional trek is 45 km long and takes pilgrims four days to reach the shrine from Nunwan base camp.