Chandigarh: The Punjab and Haryana High Court today refused to interfere in the case against popular singer-rapper Honey Singh registered by Punjab Police. It also dismissed a PIL filed before it by a Punjab-based NGO regarding vulgarity in his songs.

The rapper had sought the intervention of the high court regarding the FIR (first information report) registered against him by Punjab Police in the state’s Nawanshahr town, 80 km from here, May 16. 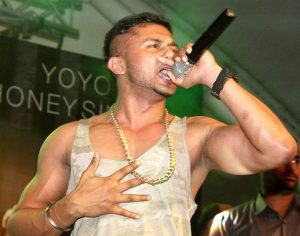 However, the court did not give him any relief in the case registered against him and said that the singer was free to proceed with any remedy, if available.

Honey Singh was present in the court today.

Punjab Police had booked Honey Singh for using obscene language in his songs. A case was registered against him under provisions of Section 294 (singing, reciting or uttering any obscene song, ballad or words, in or near any public place) of the Indian Penal Code (IPC).

Counsel for Honey Singh argued that his client had become the victim of his celebrity status.

He said that Honey Singh had not sung the controversial song – ‘Main hoon balatkari’ (I am a rapist) – on the basis of which the case was registered against him and it was some other Honey Singh who had sung the song.

Meanwhile, dismissing the PIL, a bench of Chief Justice S.K. Kaul and Justice A.J. Masih said it was up to the Punjab government to set up a mechanism for screening vulgar and obscene songs, and to decide as to what should be the “checks and balances” to be incorporated in such a mechanism.

The high court had, in May this year, come down heavily on the lewd lyrics of Honey Singh’s songs and directed Punjab Police to book him for obscenity in his songs.

A division bench of the high court had said that Honey Singh’s “songs make us hang our heads in shame.” The bench said that singers like him should be boycotted as his songs were disrespectful to women.

The Nawanshahr police had got a complaint from NGO HELP (Human Empowerment League Punjab) in January this year against Honey Singh and a few other singers for singing songs with vulgar and highly objectionable lyrics. However, police did not take any action then and registered a case only after the high court intervened.