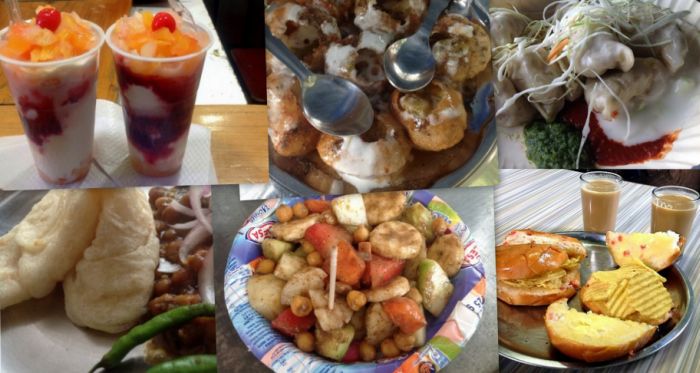 With temperatures in the hill state soaring high to touch the 30 degree mark, it’s time for the locals to beat the heat with street food. Even sitting inside the most posh restaurants cannot be as savouring as when you stumble upon a street side kiosk that serves crispy gol gappas filled with sweet and sour chilled pudina water.

Exploring the city for the first time for its street food, I realised that not only do these street walas serve the locals and the tourists with some of the best prepared street delicacies, but their lineage can be traced back to several decades.

For example, the Bhihari Lal Sharma Stall at Takka Bench, above The Ridge was the first fruit chat seller in the city that started operations in 1948. The stall stands tall at the beginning of the chat street of Shimla, Takka bench, above the famous Gandhi Statue on the Ridge. Climbers to the Jakhu Temple religiously pause here for a chat break. At Rs.30, you can now beat the heat with healthy fruit in tangy chutnis.

Next in line is British time tea stall that nestles in thick cover of forests on the thandi sadak, Chawda Maidan. The Verma tea stall, known famously as the Kewal ka Dhabba is always lively with the presence of University students, who come here to gorge on the wholesome delicacy of butter bun and tea. According to the owners of the Dhaba, Kewal and Shamsher Singh theirs is the fifth generation running this dhaba. In 1931, Lord Mountbatten, the then Viceroy of India was so impressed with their tea, that he got the shack built into a permanent structure and gave it to the family as Bakshih.

Today the Dhaba runs from 7 am till 10 pm, and serves hundred of butter buns, and plenty of tea throughout the day. You can get the butter bun at Rs.14 and tea at Rs.6.

From here I reached my personal favourite gol gappa stall situated at Navbhar Chawk, famous for St. Bede’s College. As a Bedian I couldn’t leave college without gorging on the gol gappa chat, tikka wala kulcahas and hot dogs prepared with special Indian chutnis and lots of hari mirchi (green chilli). The shack has existed for as long as I can recall, and bedians no matter in which part of the world, never forget the mouth watering chat they get here for a mere Rs. 15, and golgapas for a mere Rs.10.

Coming to cold delicacies, how can we miss “Embassy ice Creams?” No matter if its winters or summers, this ice cream joint and bakery does a roaring business. You can choose from a wide range of softies, flavoured ice creams in cups, squashes, and shakes. I die for the fruit saundae they prepare, probably slightly expensive (Rs. 70) for being included in the list of street food just, and yet a must try.  Here you can get ice creams starting from Rs.15 and go on to Rs. 100.

While upper regions of Himachal Pradesh have always been famous for serving plenty of Tibetan food, Shimla is only beginning to follow the trend. It was hard to get the name of this next shop, but it lies at the beginning of Lower Bazaar, climbing down a few steps from Sher-e-Punjab.  A bunch of Tibetans youngsters with piercings all over their face are seen working inside two separate shacks, preparing hundreds of plates of momos, both fried and steamed every day. Served with hot chilli chutney, pudina chutney and white sauce, the momos are more than just perfect. A plate of momos cost Rs.30, and one serving is enough to keep you full for long.

At Rs.30 per plate you should not miss the best channa bhatura of the town, sold at Sita Ram and Sons in Lakkar Bazaar. Perhaps it’s not bhatura its luchi, which Celebrities like Anupam Kher, and Preeti Zinta have savoured through their years in the town. Years and years have gone by, from my great grandfather till the present times, this is probably the best dhaba in Shimla. The sad part is that Mr. Sita Ram’s grandson would not part with any information and kept me waiting for two long weeks, and finally stopped taking my calls. Nonetheless, it’s his channa bhaturas that matter that most, and without taking offense I will return to eat them shortly.

And, while the list of great eating joints doesn’t end at this, as an avid food lover, these were my personal favourites. These are highly recommended for anyone who comes to town, and for all the residents who have been missing out on what the town streets have for them.