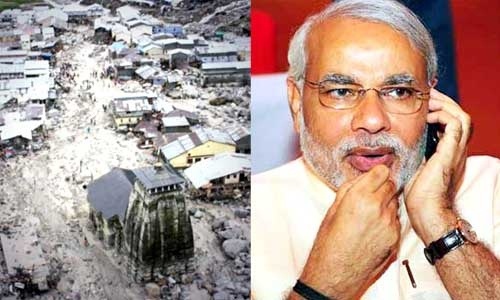 Dehra Dun : While comments by Gujarat chief minister Narender Modi often cause extreme comments by his well wishers and critics alike, but the people Uttarakhand are indebted to the BJP poster boy for his generous gestures towards this small mountain state following the macabre tragedy of June 16.

He not only came immediately and not only gave a huge amount to his Uttarakhand counterpart for relief work, but also assured all possible help not only in relief and rehabilitation but reconstruction of the devastated areas of the state.

He also offered his government’s help in the complete reconstruction of the Kedarnath temple.

But what has appealed to the people of this small mountain state is the special relief packets that have come from Gujarat.

The packets contain 32 items, from a pin for kerosene stove to salt, candles and match boxes besides ration and other essential items which are sufficient for a small family for days.

Gujarat had earlier sent a number of trucks carrying the relief packets earlier, which were distributed in the flood hit areas of Uttarakhand, but realizing the gravity of the situation and reports that there was not enough to be airdropped into the villages in the interiors of this small mountain state, Modi stood to the occasion yet again.

A consignment of 580 tons of relief material packed in 15,000 bags reached Rishikesh yet again in 15 bogeys by train. The packets, were immediately transported by trucks from the Harrawala railway station to the food hit villages so that they could provide immediate relief to the people.