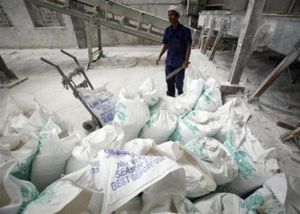 Punjab Revenue Minister Bikram Singh Majithia said that the Congress-led United Progressive Alliance (UPA) government’s approval of “the half-cooked National Food Security Bill to tempt the common masses on the eve of general elections would not work for this most-corrupt government since independence”.

Punjab alone contributes over 50 percent of foodgrain to the national kitty, despite being a small state with just 1.54 percent of the country’s geographical area. The state led the Green Revolution in the country in the 1960s to make it self-sufficient in foodgrain production.

Majithia accused the UPA government of picking up the food security idea from Punjab’s “atta-dal” scheme that started in 2007.

“The draft (food security) bill is a poor carbon copy of the SAD-BJP government’s most successful atta-dal scheme. The UPA government has never bothered about the interests of poor people and has unleashed non-stop inflation, turning the lives of common people into a nightmare,” said Majithia, brother-in-law of Akali Dal president and Punjab Deputy Chief Minister Sukhbir Singh Badal.

“The proposed five kg of rice, wheat or millets per person would serve no purpose. The Punjab government, from its limited sources, has been providing 35 kg wheat and 4 kg dal to more than 16 lakh (1.6 million) families since 2007 by spending hundreds of crores of rupees,” Majithia claimed.

Accusing the UPA government of double standards, he said that the centre was “vehemently criticising the Punjab government for providing Rs.5,000 crore subsidy to the state’s farmers, who are making a 50 percent contribution to the nation’s food kitty”.

The Akali leader said that the BJP-led National Democratic Alliance (NDA) would give the bill “practical shape by removing its shortcomings”.

Bathinda MP Harsimrat Kaur Badal, the younger Badal’s wife, accused the UPA government of “trying to woo the electorate in view of the ensuing Lok Sabha polls with the half-baked food security ordinance”.

“This is actually the ‘vote security ordinance’ of the Congress and just a political gimmick,” she said.

Harsimrat Badal said that the pro-MNC policies of the Congress-led government were against the interests of the common masses, especially the farmers and the poor.

But the opposition Congress is not amused by all this.

Bajwa said that the food security bill would cover 67 percent of the country’s population living in poverty.

“Sukhbir Badal and Harsimrat Kaur Badal have opposed the bill due to political reasons. It would have been better for the Badals to read the food bill before commenting in haste,” Bajwa said.

Bajwa said that Badal was misleading farmers by stating that the bill is anti-farmer. He said that the interests of the farming community were taken into account before deciding the bill. “Six crore (60 million) tonnes of food grains would be required to meet the demand of the food security bill and it will be in the interest of farmers,” he said.

Senior Congress leader Sukhpal Singh Khaira, challenging Harsimrat Badal to a debate, said: “If the SAD-BJP launches the atta-dal scheme, it is termed ‘Raj nahin, seva” (not rule but service), but if the UPA reaches out to the poor, it is vote-bank politics. Why these double standards?”