Shimla: Lambasting the union government for denying asylum to Edward Snowden, the former US security contractor who has exposed the massive snooping operation of the US government, CPI (M) politburo member Brinda Karat said that the Indian government had mortgaged its foreign policy with USA as the foreign minister Salman Kurshid has even defended gross violation of individual privacy trampled upon in the process. 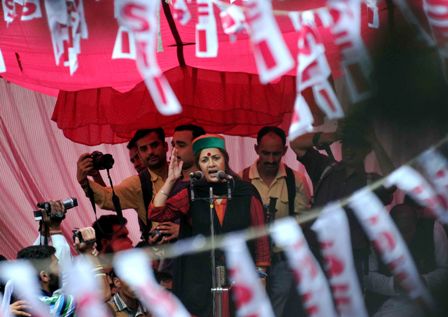 On an issue where even European governments have registered strong protests about the US snooping operations, the Indian government has stooped very low to the imperial power by defending it, said Karat, addressing a rally of National Convention of Student Federation of India at Sabzi Mandi grounds here today.

The UPA government has acted in a reckless manner by declining asylum to Snowden, who is rendered  stateless after USA annulled his passport said Karat. She asked the youth to protest and oppose the stand taken by the Indian government on the issue.

Using the technological advantage, US was intruding into privacy of individuals and nations for years with impunity, something the 29 year old Snowden exposed and cautioned the world about the sinister designs of CIA and other US agencies, she said.

Asking the youth to desist from falling for the neo liberal policies of the UPA government, Karat said that the government was hell bend upon inviting FDI in retail and the attempt by the Congress government in Himachal Pradesh to permit such ventures should be resisted.