Chandigarh/New Delhi: The water level of the Yamuna in Delhi would start rising tomorrow evening as an unprecedented over eight lakh cusecs of flood water released from the Hathnikund barrage in Haryana’s Yamunanagar district reaches the capital, officials said. 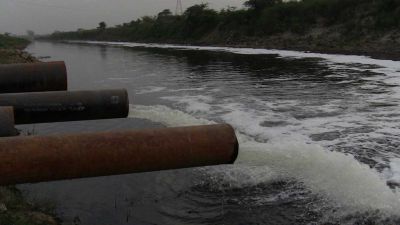 Haryana Irrigation Minister H.S. Chattha said Monday that there has been an “unprecedented discharge of 8.06 lakh cusecs in river Yamuna, which has never been received so far in a month of June”.

He said that although no major flooding has been reported from any part of Haryana, district authorities have been alerted downstream.

Chattha said that the effect of the peak discharge was expected to reach Delhi by tomorrow.

“The level of river Yamuna in areas downstream of Hathnikund Barrage have started rising and the peak discharge of 5.35 lakh cusecs yesterday (Sunday) night has already been received in district Karnal,” he said.

In Delhi, Rajiv Kumar of the Delhi Disaster Management Authority told that “though there is no sign of flood, we have taken all flood control measures in the review meeting on Monday”.

Currently, Yamuna is flowing at a height of 202.34 metres near the old railway bridge in central Delhi where the danger mark is 204.83 metres.

He said that as a result of increase in level of water in the Yamuna, there was a threat of floods in several villages of the Faridabad sub-division.

“Residents of these villages have been warned not to go near river Yamuna and also ensure that their children and cattle do not go close to the river. Those living in slums on Yamuna banks had also been cautioned and asked to shift to safer areas,” he said.

Karnal Deputy Commissioner Renu S. Fuliya said that about 90 stranded people at village Shergarh Tapu, 42 from village Chandrao and 13 more people in village Dabkoli had been rescued Monday. 15 more people have been saved from the area near Jadauli village, she added.

Sonipat Deputy Commissioner Pankaj Aggarwal said that revenue officials have been directed to get people in villages Manauli and Toki vacated.