Dehra Dun : The very issues that brought the Congress to power in Uttarakhand have put chief minister Vijay Bahuguna  in a catch-22 situation as he faces a near revolt in the party on the delicate issues of development, corruption and transparency in governance, despite his playing musical chairs with the bureaucracy in the hope of sending the message that he means business. 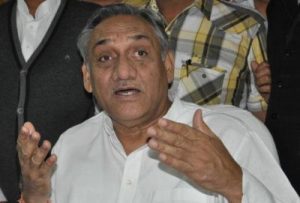 Vidhan sabha speaker Govind Singh Kunjwal who has expressed his concern at the rampant prevalent corruption and more than once, fired yet another salvo when he said that despite almost 18 months having been spent in office the Bahuguna-led government had not even started implementing the promises made in the party manifest in the last assembly elections.

Though the Speaker has come under fire from a section of Congress leaders in the state, close to the chief minister, but he has not refrained from calling a spade, a spade, and appealed to all like indeed people and intelligentsia in the society to come out openly against the “corrupt system”, or the very existence of the state may come under a question mark.

But now party MLAs Harish Dhami, Manoj Tewari, Hemesh Kharakwal and Mayukh Mahar have revolted openly against Bahuguna on the issue of development. Some other party legislators, who are not that vocal are preferring to remain as fence sitters and voice their resentment at the opportune time and platform.

Though the chief minister has himself played down the issue saying that he enjoyed the support of about 40 MLAs, and if there are four or five voices of discontent, is nothing to judge the performance of his ministry by. Bahuguna’s supporters are pointing fingers at union water resources minister Harish Rawat and his supporters for raking up the controversy.

But they are quiet on why the chief minister went with the olive branch to the union minister and called for truce, if all is honky gory. Obviously he has reasons to fear that his performance has been far below the desired levels as far as not only the Congress legislators go, but even the masses of this small mountain state, who are by and large disappointed by the performance of this government.

With Lok Sabha elections due next year, Congress MLAs feel that there could be repeat of the Tehri by-election which Bahuguna’s son Saket Bahuguna lost to the BJP green horn, despite he being the chief minister’s son. There are rears that is the present state of affairs prevail, the party candidates could lose in all the five parliamentary constituencies in Uttarakhand.

Party MLAs, did not mince words when they said that it is they who area responsible to the electorate of their assembly segments for development works to be undertaken in the state. “The chief minister is ensuring that works are done only in constituencies represented by MLAs close to him”, they alleged.

They feared that should the Congress candidates in the elections to Lok Sabha lose from their constituencies, it will give whipping handle to their detractors when the time for distribution of assembly tickets comes. Undeer such circumstances they feel that it is better for them to voice their protest now, than face the ignominy of the party high command later.

All said and done the lackadaisical performance of the Bahuguna government in the near 18 months that it has been in power has been highlighted more by the Speaker and Congress MLAs than the opposition BJP, which feels it is gaining more publicity from the infighting within the Congress than it would by raking up issues against chef minister.

In fact, rumours have already started floating in political circles here that the party high command may have to step in to take stock of the situation prior to Lok Sabha elections. Word doing the rounds is that there may be a change in the state leadership and perhaps union water resources minister Harish Rawat may be asked to take Bahuguna’s place.