The jury is still out on how the blame is to be apportioned between human actions and nature’s fury for the Uttarakhand disaster. However, from the disaster management perspective the catastrophe has exhibited characteristics of a complex event due the combination of hazards – flash floods and landslides – and the inclement weather which precluded access by air to the region in the initial stages. The resultant destruction of ground transportation infrastructure also impacted the time taken to respond. Lastly being a hilly area the disaster zone has got divided into isolated pockets of devastation which has hampered relief work. 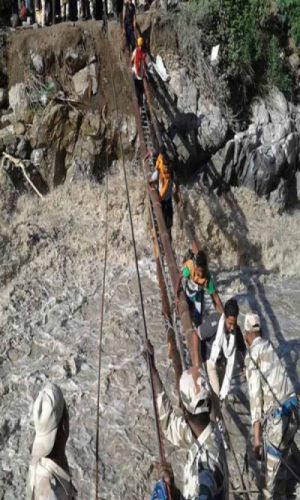 While a complete analysis of the disaster will be possible when more details are available at this stage it is only possible to make an initial assessment of the response to the disaster. The representatives of the National Disaster Management Authority (NDMA) were found doggedly responded to the media on the government’s response to the disaster; indicating a lack of institutional protocols and public awareness of these. The NDMA is responsible for formulating guidelines on responding to various disasters but has no powers or the infrastucture to enforce them, evaluate their implementation or conduct relief operations, as disaster management is a state subject. The Uttarakhand government has admitted that, as pointed out by CAG, it has fallen short of the disaster preparedness standards laid down by the NDMA.

As for information dissemination, the disaster management division is supposed to have a functional Emergency Operations Centre (EOC) in communication with the state EOC which is required to provide situational awareness to all government ministries and the public at large to aid coordinated response. However, it was the NDMA which was releasing bits and pieces of information as and when it was available, possibly through the National Disaster Response Force (NDRF) The EOC is also required to coordinate relief operations at the national level, ensuring suitable responses by various ministries such as defence, railways, food and supplies et al. The EOC of the Uttarakhand government was required to perform a similar function at the state level. Alas, adhocism has been the bane of disaster management in India.

An issue directly influencing the impact of a disaster, particularly for the ordinary citizen, is that of providing early warning. In India’s disaster management framework, the Indian Metrological Department (IMD) is the nodal agency for gathering information from the concerned agencies and issuing disaster-related early warnings. In this case, the IMD warned the Uttarakhand government of the likely heavy rainfall in the region 48 hours in advance.

The warnings related to high water levels and flooding are to be generated by the Central Water Commission (CWC) and sent to IMD for dissemination. Besides timeliness, a disaster early warning suffers from two classical pitfalls; one of clarity and interpretation and the second of last mile dissemination to the citizens. In the present case both are applicable. Uttarakhand Chief Minister Vijay Bahuguna has told the media that his government received IMD’s warning on rainfall but there was no indication of cloud bursts, flash flooding and landslides. The interpretation of the early warning in terms of its implications with respect to the prevailing local conditions of soil, river flow, among others, is the responsibility of the local disaster management officials. Citizens at both the landslide hit areas and downstream complained of lack of any early warning. An appropriate warning would have left citizens better prepared and saved lives.

Another critical area is that of communication – both between government agencies and between citizens themselves. It was heartening to see that mobile communication towers at Kedarnath survived the devastation wreaked by the flash floods. These, however, went out of the grid when the power supply was cut off and generation sets ran out of fuel, putting the area out of communication. Availability of cellular communication would have aided in need assessment, relief and rescue and coordination of the air effort and provided much needed psychological boost to the survivors. This is another grey area in the disaster management framework as there are no guidelines issued by the Department of Communications for telecom companies for disaster-proofing their infrastructure and taking measures for early restoration of the communications network.

The 2004 Indian Ocean tsunami resulted in the enactment of the Disaster Management Act, 2005, and the creation of the NDMA. We do not have to wait another disaster to learn our next lesson and bring a quantum improvement in how we, as a nation, deal effectively with natural and manmade disasters.