Stringent laws and regulations in Turkey have now succumbed to brutality as innocent civilians are being dragged on the streets of Istanbul by police officers because they demand a reform in the country, their democratic right.

What started as a simple protest in Istanbul against the Turkish government’s attempt to demolish the Gezi Park and replace it with an Ottoman-era military barracks to be used as a shopping mall has transformed into a nationwide revolution over the weekend.

The protest has resulted in a violent clash between the protestors and police, who have used tear gas and water cannons to disperse the demonstrators. The chaos has continued yesterday and shows no signs of subsiding.

According to the Turkish Officials more than 1,700 people have been arrested in demonstrations across 67 towns and cities, with 79 wounded, though a Turkish doctors’ group reports that injuries are actually closer to 1000 or more.

The government’s increasing authoritarian tactics to assert Islamist policies in the country in the last few years has left the public, especially the youth, exasperated.

Systemic de-secularization of future generations through Islamification of school curriculum, laws restricting the consumption of alcohol post 10 p.m. to “protect new generations from such un-Islamic habits” are some of the issues that the young are not willing to accept without a protest.

Heedless to its obligatory duties, the state has further victimized its citizens through implementation of harsh austerity measures.

The democratic process in Turkey may be seen crumbling, particularly since 2007. Journalists have been arrested on questionable grounds, business owners are being punished if they oppose the government and slowly freedom of expression is being gagged.

Just last week when the streets of Istanbul were on fire and were being covered live on CNN International, the global TV network was   airing a cooking show on CNN Turk, in fear of the government’s intimidation. 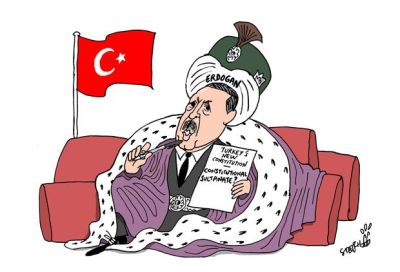 Social media was “the worst menace to society” for Prime Minister Recep Tayyip Erdogan, but it did come to the rescue of thousands of ordinary citizens and protestors in the country who in these critical times simply were not willing to rely on what their own national media was showing.

A large section of Turkey ‘s media, which in normal times covers all major events live, has been silent about the mass protests.

Though the Justice and Development Party (Turkey) AKP, has overseen dramatic Turkey economy, clocking a 8% rise in the growth rate in 2012, yet the people want the Prime Minister and his government to resign straightaway.

The brutality over the weekend unleashed the rage of the citizens that was simmering for years and caused apocalyptic results for Istanbul. Crony capitalism and AKP’s growing authoritarian nature along with arrogance of power need to be addressed immediately to bring back peace in the country.

Erdogan while dismissing his opponents said, “If you gather 100,000 people, I can gather a million,” a clear indication of his dictatorial regime.

Turkey is a democracy and its people have the right to hold divergent ideological, religious and socio-economic beliefs even if opposing that of “Sultan Erdogan.”