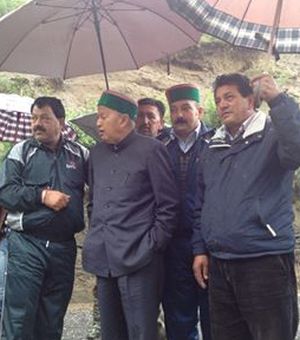 Those stranded include Chief Minister Virbhadra Singh, who was electioneering for the Mandi parliamentary by-poll slated June 23.

The chief minister and his staff have been stationed at Sangla, some 275 km from Shimla, for the past two days.

Official sources said over 1,500 tourists, mainly from West Bengal, were stuck in the Sangla Valley.

Five members of a family, including three children, were buried alive early today when boulders fell on their house at Chagaon village near Tapri, some 220 km from state capital Shimla, Superintendent of Police G. Shiva Kumar told over phone.

He said the family was sleeping when the incident occurred. Entire Kinnaur district has been experiencing heavy rain for the past two days.

Even Pooh block in the district experienced over one feet snow, which locals said was untimely.

He said work is on to resume link roads in the district and the picturesque Sangla Valley, which has been cut off due to landslides and a large number of tourists are stranded between Sangla and Chitkul villages.

Chief Secretary Sudipto Roy told reporters in Shimla that the election commission has granted permission to airlift the chief minister from Sangla.

“The chief minister can’t be airlifted as the weather in the area is still very hostile,” he said.

He said as the weather clears the operation would be launch to rescue even the stranded tourists.

“All tourists are fine there and have been staying in hotels and guesthouses,” he added.

A government spokesperson here advised tourists not to venture into remote areas of Kinnaur, Shimla and Sirmaur as chances of rain heavy were high till Tuesday.

“The weather in Kinnaur, Shimla and Sirmaur district is quite harsh compared to other districts. Heavy rain will occur at many places in these three districts over the next 24 hours and decrease thereafter,” India Meteorological Department (IMD) director Manmohan Singh said.

Local legislator Jagat Singh Negi, who is accompanying the chief minister, said the maximum damage to the property – both government and private – in the district was reported from the Pooh block due to snow.