Shimla: Historic Sun temple at Nirath village in Sutlej river valley not only suffers neglect but is also threatened by a large dam coming up in the vicinity; something that has been protested by the state archaeologists.

Dam site of the proposed large Luhri hydroelectric project on the river at Nirath is less than 200 meters downstream of the heritage temple site.

“It is only with a condition that no harm would be caused to the temple that we have accorded conditional permission to the Luhri hydro power project,” says CL Kashyap, state archaeological engineer. 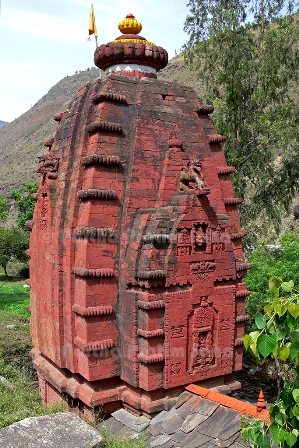 Fears have been raised that the back waters of the dam would wash into the compound of the temple, seep into the rock foundation and cause permanent damage to it.

“Be it ensuring its safety or relocating the temple, the onus is on the project authorities to safeguard the Sun Temple,” says Kashyap.

Dating back to the seventh century, when foundations of the temple were laid; neither is the monument looked after by the Archeological Survey of India (ASI) nor by the state authorities and the village community residing in the neighborhood has not bothered to maintain the heritage structure.

Director of language art and culture, DK Gupta says, “it is the only Sun temple in Himachal Pradesh and perhaps the only one in north India.”

Sources disclosed that efforts to take over the temple on two earlier occasions, had failed. ASI had shown interest in taking over the stone temple, but the local community had resisted the move.

State efforts to take over the temple and restore it have failed to get off for there are no revenue records available for the templeproperty. Much of the temple artifacts were lost to a break-in 2008-09.

“From time to time we have been giving financial grants to the temple management committee for its maintenance and upkeep,’ says Gupta.

However, other than the skikara style stone structure, most of the other wood and stone buildings in the temple compound are in a dilapidated conditions.

Archaeologists estimate that the foundations of the stone temple date back to the 7th century but the upper structure appears to have been rebuilt a later date though not later than the 12the century.