Dehra Dun : Notwithstanding the fact that the National Tiger Conservation Authority and the Uttarakhand forest top brass have taken cognizance of the death of three tigers in the span of week in the Corbett National Park and its immediate landscape, there is need for not idle brainstorming but to get to the grass root of the problem. 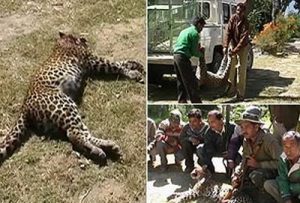 It does not require a Sherlock Holmes to know that the felines were poisoned to death and the culprits were none other than villagers residing in the villages in the immediate vicinity. The tigers do prey upon the cattle of the villagers that come to the forest for grazing, because of which the villagers have eked vendetta on the tiger.

Forest officials here admit that the forests of Uttarakhand are teeming with wildlife and it is estimates that about 250 tigers, 3000 leopards and herds of wild elephants roam or prowl in the wilds. But the forest cover is continuously shrinking rather than increasing it so that the increased wild life can find space to live in freely.

As more and more forests are felled to make room for so-called developmental projects at the cost of the fragile environment of this small mountain state, the green cover is reducing fast and with it is increasing the man-animal conflict. This conflict is the one greatest cause of the large number of felines that are killed in Uttarakhand every year, besides the one that die natural deaths.

Over the past, forest officials have been passing the buck on to poachers, who were no doubt active in the forests of this small mountain state, but one must not forget the fact that they were taking advantage of the natural hatreds of the villagers of the felines. In fact the villagers were so keen to get rid of the big cats that they were willingly helping poachers to kill them.

If one takes figures into consideration, the national census of the state has revealed that the forest cover has reduced by 4856 sq kms from 2001 to 2011 and the habituated areas have increased by 30 sq kms. Incidentally Uttarakhand came into being in Nov 2000 and since then there has been massive felling of forests and habitations have covered the earlier green tracts.

Surprisingly, there is not one district of the state, where the green cover has gone up, despite the fact that the famous ‘Chipko Movement’ of the 1970s, was started here by Gaura Devi. The green cover in Dehra Dun, which also happens to be the state capital has gone down from 1124 sq kms in 2001 to 695 sq kms in 2011.

And mind you this toll of the forest land has not been taken by the developmental projects. In fact chief minister Vijay Bahuguna met UPA chairperson Sonia Gandhi recently and complained that the union ministry of environment and forests was stalling developmental projects in Uttarakhand because of which development was lagging in this small mountain state.

The inroads into the forest cover are being made by vested interests for the making of resorts and other centres for activity. While some forest land, especially in Udhamsingh Nagar in particular has been cleared and usurped by big farmers for agriculture, in the majority areas of the state it has been primarily done by the land mafia for setting up resorts.

And this is happening because of the politician-bureaucracy-land mafia nexus. The land mafia is having a field day as those in power are willing to look the other way. It is an open secret that a number of politicians and bureaucrats of the state have resorts or land in the immediate vicinity of forests and despite it being brought to the notice of the people who matter, no action is taken or efforts made to probe how the land classification was changed and ownership made in official records.