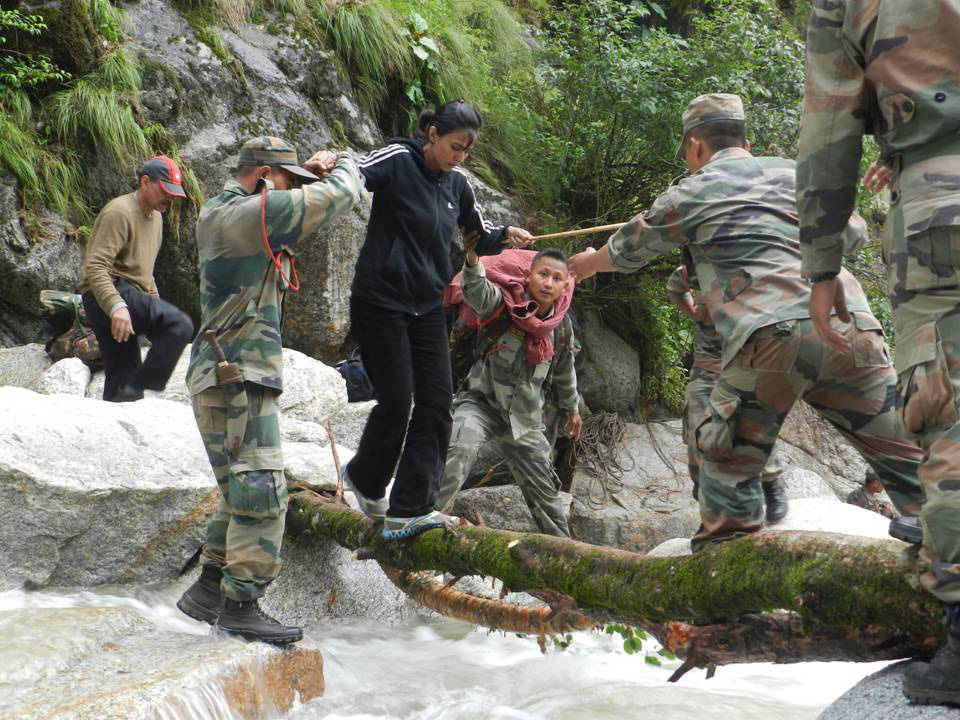 New Delhi, June 27 (IANS) Persistent efforts over the past more than 10 days have succeeded in the evacuation of more than 100,000 people, including locals, from the rain and flood-hit areas of Uttarakhand as authorities cremated more bodies in Kedarnath Thursday. Around 1,800 people are still stranded in the state.

With 12 days elapsing since the flood-rain tragedy hit the state, a clearer picture of the massive losses has began to emerge. Over 1,500 roads have been swept away, while around 2,000 houses and 154 bridges have been damaged.

The bodies of 18 personnel – from the Indo-Tibetan Border Police (ITBP), the Indian Air Force (IAF) and the National Disaster Response Force (NDRF) – who were among the 20 killed in Tuesday’s chopper crash were also recovered.

Ten of the bodies were taken to Gauchar, which the IAF is using as an air base for rescue operations.

An ITBP officer said some of the bodies were so badly burnt that it was difficult to identify them.

The Mi-17 helicopter was carrying 20 personnel including five from the IAF, six from the ITBP and nine from the NDRF when it crashed Tuesday near Gaurikund while on a rescue mission.

NDMA vice chairman M. Shashidhar Reddy said : “Approximately 1,829 people are still stranded all over Uttarakhand and we are hopeful that the rescue operation would be over by Friday.”

The National Disaster Management Authority, an autonomous body to coordinate disaster preparedness, said 104,095 people had been evacuated from the state till Thursday.

Reddy also said that several roads, which had been closed due to the rescue operations, have now been opened. The roads from Uttarkashi to Gangotrri, Joshimath to Badrinath and a few roads going towards Rudryaprayag are still closed due to damage in landslides and repair work was on.

He said that 1,520 roads were damaged all over the state.

After 300 bodies were cremated together on Wednesday, another batch of bodies was cremated Thursday.

Reddy said DNA samples of all the bodies have been taken. He did not have the number of bodies cremated.

With many bodies still buried under the debris, NDRF teams have been asked to assist the local administration to recover the bodies, Reddy said.

The union health ministry has stated that no disease outbreak has been reported from any part of Uttarakhand.

Though there were some diarrhoea cases in Haridwar, Uttarkashi, and Rudraprayag, no outbreak of water-borne, food-borne, air-borne or direct contact diseases have been reported from the affected areas yet, the official said.

A three-member high-level committee from the health ministry is in Dehradun to review the public health situation with the state health authorities, while a specialist from National Vector Borne Disease Control Programme has been placed with the state government for providing assistance.

The Indian Red Cross Society has also deployed a two-member team to Uttarkashi and another team to Pithoragarh. A high-level team also visited the state for assessment and coordinating relief work with the state Red Cross unit.

The health ministry has also provided 1,100 bags for carrying dead bodies, which has been arranged through the Red Cross. An additional 500 bags has also been procured.

Reddy said a guard of honour would be accorded Friday to the chopper crash victims in Dehradun. Home Minister Sushilkumar Shinde and Reddy would be going to Dehradun Friday.