Banihal: A 11-km railway tunnel across the Pir Panjal mountain range, inaugurated by Prime Minister Manmohan Singh today, is not only the longest such in India but an engineering marvel and a “dream come true” for the people of Jammu and Kashmir.

It took seven years for thousands of men, most of them highly-trained and skilled in tunnel building, who braved geographical constraints and inclement weather to build the all-weather tunnel. Some of the tunnel boring machinery – an improved Austrian version – has been used for the first time on such a large scale in the country during the laying of the tunnel. 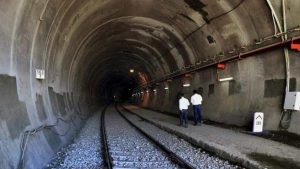 A three-metre-wide road has also been provided inside the tunnel for maintenance and relief and rescue operations in the event of any eventuality.

“The tunnel has been made water-proof by providing a continuous PVC membrane between the primary and secondary lining. It is equipped with state-of-the-art air quality monitoring, communications, fire-fighting and emergency rescue systems,” an engineer at the site told, not wishing to be identified.

Built at a cost of Rs.1,300 crores ($213 million), the tunnel has reduced the surface distance between the Qazigund town in the Valley and Banihal town in the Jammu region by 18 km, besides providing an all-weather surface link between the two regions.

The over 300-km-long Srinagar-Jammu highway, till today the only surface link between the landlocked Valley and the rest of the country, would often remain closed for days without end in the winter months due to heavy snowfall on the Banihal sector of the highway.

“That experience is now a thing of the past for the people of Jammu and Kashmir,” Congress President Sonia Gandhi told a jubilant public rally here when an eight-coach train was flagged off from here to Qazigund.

The tunnel had been a dream for the people of the state and not many believed it would become operational in their lifetime.

“I had been hearing of a railway tunnel that would connect us with the Valley and the people there with Banihal and other parts of the country. Today, I have seen the dream come true before my own eyes,” Siraj-ud-Din, 70, who was part of the jubilant crowd that saw history being made as the train cruised from here through the tunnel to the Valley, told.

Others in the Valley are hopeful their horticultural produce would be carried at lower costs and without any hassles through the tunnel in the future.

“The tunnel is going to reduce the transportation cost for our fruit to terminal markets in the country and also ensure that it reaches in time , whether it is raining or snowing,” Mushtaq Ahmad, who has a large apple orchard in north Kashmir’s Sopore town, told.