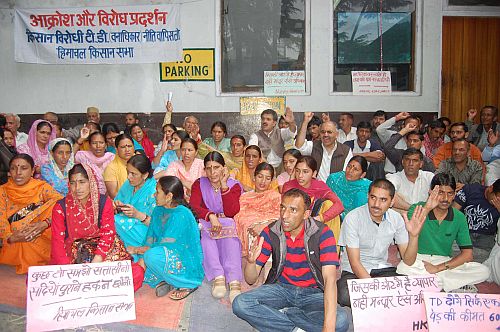 Shimla: With the government unmoved by farmersâ€™ opposition to the new timber distribution (TD) policy, members of Himachal Kishan Sabha (HKS) today resorted to a 24 hour token dharna outside the forest department headquarters.

Kuldeep Tanwar, president HKS said, â€œin implementing forest laws the government was adopting a dual policy. On one hand large scale forest felling was being permitted for setting up big industries and power projects in the name of development and on the other hand a farmer rights to timber for constructing a house was being questioned on the pretext of environment protection.â€

The government under the pretext of judicial intervention was attempting to snatch age-old TD rights of residents, said the HKS president. Farmers would be forced to intensify their agitation unless the issue is not settled, he added.

The Sabha had made a representation to the chief minister about TD rights through the Principal Chief Conservator, Forest on 16th March but even after 36 days the document has not reached the CMâ€™s office, said Tanwar. â€œIt only shows the hollow claims about the government being sensitive to farmers and other residentsâ€™ issues,â€ he said.

He held that the government had not neither able to explain the arbitrary new TD policy to farmers nor indicate at what level and how distribution would be done.

Citing the example of burning down of Malana Village in an inaccessible valley of Kullu, three years ago, Tanwar questioned that issues about how the forest department intended to meet timber needs of people living in remote regions where no distribution network exists needed to be settled.

After the village in Kullu valley had got burnt down, there was no way by which the victims then could avail timer to reconstruct their dwellings, which the government is well aware of, he said.